« Weekly Letter: Seeing Beyond the Surface of the Object
How Cartoonist Al Jaffee Found His Inner Jewish Superhero » 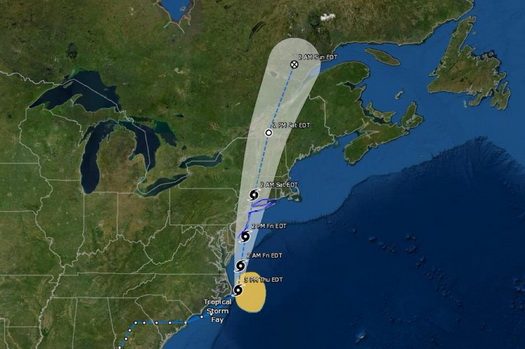 The National Weather Service has issued a Tropical Storm Warning for a large swath of the North East, including New York City, that is projected to last through Friday.

The tropical storm has been named Fay, and grew off the coast of the Carolinas. The storm is moving northeast along the coast at wind speeds of approximately 40 mph. It is expected to increase in force throughout the next 36 hours.

The storm will pound New York City over Friday, with flash flood and high wind warnings in effect.

A tropical storm is a tropical cyclone that has maximum sustained surface winds ranging from 39-73 mph.

« Weekly Letter: Seeing Beyond the Surface of the Object
How Cartoonist Al Jaffee Found His Inner Jewish Superhero »