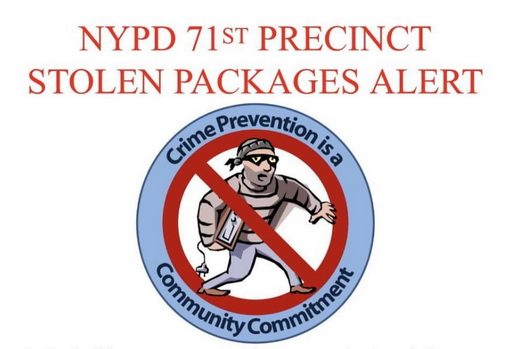 The NYPD 71st Precinct would like to remind everyone to be vigilant this holiday season, as a rash of package thefts and car break-ins have plagued the area.

The NYPD 71st Precinct, that covers a majority of the Crown Heights area has sent out a reminder to be vigilant this holiday season.

As every year around the holiday season, there is an uptick in package thefts and car break-ins in the area.

Although the area of Crown Heights has not been as badly effected as some other areas on New York City, the police department has still seen a rash of these crimes in the area.

Package thefts have been a large problem, as these thefts normally happen when the homeowner is not home, and the packages are left on the front porch. This makes it easy for the thieves to make off with the unattended packages.

Packages left in lobbies are not safe either, as many recorded theft have shown. Thieves easily slip into buildings by following a tenant in, then simply walking out with the packages.

Staying vigilant, having a prearranged understanding with neighbors to bring all packages in, and tracking your packages, are easy ways to avoid having packages stolen.

Another uptick has been seen in car break-ins. In the Crown Heights Area, break-ins have been reported on Empire Blvd, Kingston Ave, and Eastern Parkway. In most instances, valuables had been left where they could be seen, and the cars were targeted for that reason.

To easily avoid this, make sure to take all your valuables with you, and make sure all doors are locked before leaving your vehicle.