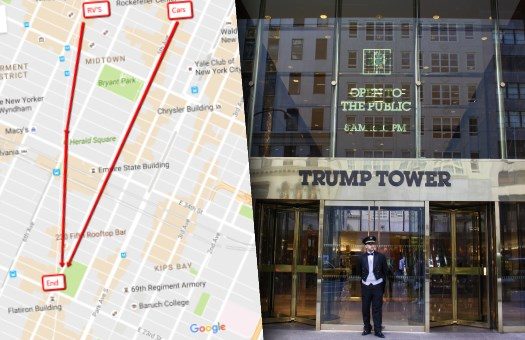 The NYC Menorah Parade is changing its route as per instructions from the NYPD Counter-terrorism Unit.

With the annual NYC Chanukah Menorah Parade approaching, the Mitzvah Tank Organization has announced a route change due to security.

The NYPD Counter-terrorism Unit and President-elect Donald Trump’s security detail do not allow trucks or large vehicles to pass Trump Tower and have asked the Mitzvah Tank Organization to create a new route for this years menorah parade.

The new route will be as follows: After passing the Lubavitch Youth Organization’s menorah on 59th St. and 5th Ave, the Mitzvah Tanks will turn on 57th St. and go down Broadway passing through Time Square while the cars will continue on their regular route past Trump Tower on 5th Ave, in affect doubling the publicity of the parade. The two routes will meet at 23rd St. where Broadway & 5th Ave meet at the end of the parade.

Mitzvah Tank Org. co-director Mordy Hirsch says: This obstacle has turned out to be an amazing boost toward a greater Pirsumei Nissah than ever before causing thousands more New Yorkers to experience the light of Chanukah.

Mitzvah Tank Org. co-director Moshe Shmukler is working tirelessly along with the NYPD to ensure that the parade will be executed in a most orderly fashion, and noted: We are turning this challenge into a Blessing.

Registration for the NYC Menorah Parade is now open at http://www.mitzvahtanks.com/templates/articlecco_cdo/aid/3526655.

The coordinators kindly request that cars register as early as possible to ensure a place in the parade.

The parade is being organized by the Mitzvah Tank Org. under the auspicious of Lubavitch Youth Organization.

The parade will take place Monday, 26th of Kislev, Dec 26th, the third night of Chanukah, at 5 PM sharp.