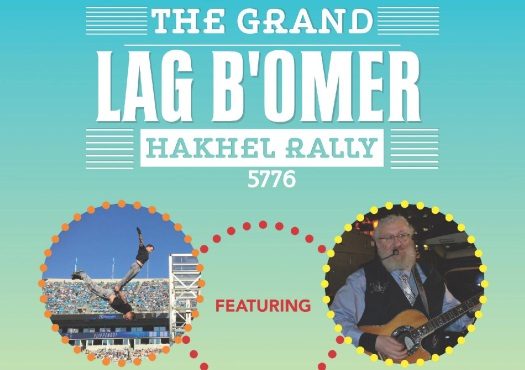 In honor of Lag Ba’omer and the year of Hakhel, the National Committee for the Furtherance of Jewish Education (NCFJE) has organized a spectacular program for all ages, which will be held in the Old Boys and Girls School Field on Maple St. and Troy Ave.

“It is a venue where we were zoche to have the Rebbe visit the Lag B’Omer outings numerous times, most recently in 5751,” said Rabbi Shimon Hecht, Director and emcee of the program. “We wanted a location where we can accommodate more children and adults than usual to join together in the spirit of Hakhel, but still have a location where the Rebbe joined us and we felt this would be the most appropriate and accommodating space.”

The program is headlined by a Sicha from Lag B’Omer 5727 (1967), in which the Rebbe explains the connection between Lag B’Omer and Hakhel, and was recently remastered by JEM. It will also feature Flippenout – high-flying, world-record holding trampoline athletes, and Chaim Fogelman, who will be joined by special guests for a performance celebrating the 40th anniversary of the 12 Pesukim.

Parents who would like to join can get wristbands at the NCFJE office at 824 Eastern Parkway Tuesday-Wednesday from 10am to 5pm. For more information, please email info@thegreatparade.com.

“We look forward to a most successful Lag Ba’omer outing, and we are confident this will bring nachas to our Rebbe,” said Rabbi Hecht. “The staff at the NCFJE would like to thank those who are supporting and will support to make this program a success.”