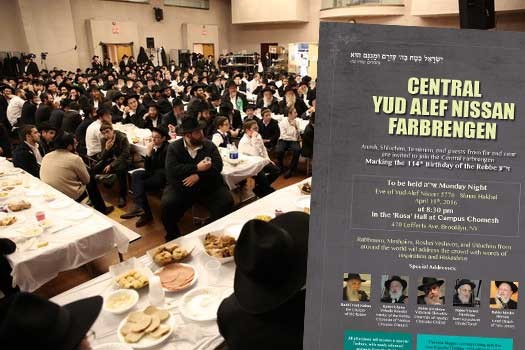 A grand Farbrengen will be held tonight in honor of Yud Aleph Nissan, the Rebbe’s 114th Birthday.

The Farbrengen, which will be a big Hakhel Gathering, will take place 8:30 PM tonight at Beis Rivkah – 470 Lefferts Ave.

Lubavitch Chassidim are preparing for a global celebration in honor of Yud Alef Nissan, marking 114 years since the Rebbe’s birth. A grand Farbrengen will be held by Agudas Chassidei Chabad Haolomis.

The speakers will farbreng, share memories and stories related to Yud Alef Nissan. They will demand concrete action from the members of the community, in the spirit of the Hayom Yom of Yud Alef Nissan which explains that: “On his birthday, one should spend time in seclusion. He should recall his experiences and think deeply into them. He should then repent and correct those (of his past deeds) that need correction and repentance.”