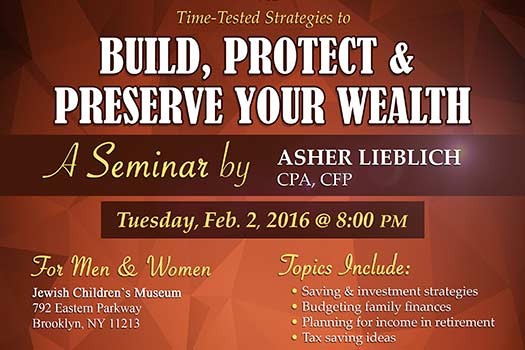 Crown Heights accountant and financial adviser Asher Lieblich recently published a book titled “The Gift of Wealth,” whose theme is time-tested strategies to build, protect, and preserve wealth. An upcoming free book launch event will feature a seminar and a question-and-answer session with the author.

Asher Lieblich, who has been a resident of Crown Heights for almost 40 years, recently published a book called The Gift of Wealth. The book’s theme is time tested strategies to build, protect and preserve your wealth. Asher initially wrote the book to give to his children and grandchildren. He included many stories from which to learn.

When he came close to finishing it, he realized that the book would be useful for anyone to read, so why limit it to just his family?

The Gift of Wealth is a simple-to-read book, giving readers the basic knowledge, in easy to understand terms, to start and build a successful nest-egg. Asher believes that the best way to learn is through stories, and there are lots of them in his book.

Shortly after releasing his book, Asher received positive feedback from readers. The information he provided made an impact on people’s lives.

Many people began asking Asher to host a Seminar in Crown Heights so they could hear, first hand, the concepts presented in the book.

After the seminar, there will be a Q & A session and then a book signing. The seminar will be free of charge; he just asks that you RSVP on the event page (link below).

The event is free and participants are requested to RSVP in advance by Clicking Here.