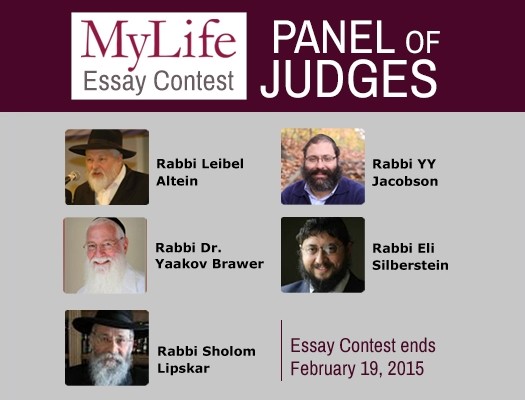 In honor of the Alter Rebbe’s 202nd yahrzeit on Chof Dalet Teves, and first  anniversary of the acclaimed MyLife: Chassidus Applied webcast series, the Meaningful Life Center has launched the MyLife Essay Contest, and will award $10,000 to the winning essay which applies a concept or idea in Chassidus to solve a contemporary life issue or challenge. Contest details can be found online at www.meaningfullife.com/mylife/contest.

The contest is kicking off today and is open to the public. The winners will be selected by a panel of judges comprised of some of the most distinguished Torah and Chassidic scholars in the world – Rabbi Leibel Altein, Rabbi Dr. Yaakov Brawer, Rabbi YY Jacobson, Rabbi Sholom Lipskar and Rabbi Eli Silberstein.

Rabbi Simon Jacobson, Dean of the Meaningful Life Center (MLC) explains the motives for launching this unprecedented competition. “MLC is dedicated to presenting Chassidus as a blueprint for life. The Rebbeim invested their entire lives to teach us Chassidus. They left us with hundreds of volumes of treasures –a comprehensive blueprint of our spiritual DNA and the building blocks of existence.  The world’s best kept secret.

“As the first anniversary of MyLife: Chassidus Applied drew close, we challenged ourselves with the ultimate question: How can we engage and motivate a new generation of leaders and thinkers to demonstrate the life changing methodologies found in Chassidus? What can we do provoke the public to invest energy and creativity in presenting these teachings in ways that address the real challenges men and women face today? How can we tap Chassidus for practical tools to live the most fulfilling life possible?  And with that, the essay contest was born!” said an animated Rabbi Jacobson.

The contest is an outgrowth of the pioneering and highly popular MyLife: Chassidus Applied weekly Sunday night webcast series – a newhafotzas hamayonos chutza initiative, where Rabbi Jacobson applies Chassidic teachings to answers people’s questions, in simple, clear language while being heavily sourced. Each episode is jam-packed with advice from the Rebbeim, gleaned from letters, sichos and maamorim that succinctly address personal issues for any level of listener.

Anyone over 15 years old is eligible to submit an essay at www.meaningfullife.com/mylife/contest. The contest begins today, January 18 (28 Teves) at midnight, and runs until February 19 (Rosh Chodesh Adar). Essays may be written in English, Hebrew or Yiddish and will be judged blindly* for a number of factors, as outlined in the contest rules and guidelines, which can be downloaded and read on the contest landing page. The objective and focus of the essay is to demonstrate how Chassidus provides, even for a secular person, powerful tools for personal transformation. How Chassidus addresses the most fundamental human needs, from the emotional to the psychological and the spiritual, from finding happiness, inner peace, and passion to alleviating anxiety, fear and other impediments.

The Meaningful Life Center will award three prizes – sponsored by an anonymous benefactor – for the best essays selected by the judges: A $10,000 First prize, a $3600 Second prize, and a $500 gift certificate for Third prize. The winning entries will be published and publicized.

Rabbi Jacobson urges everyone to enter, remarking, “This is the first time that adults are being financially rewarded for applying Chassidus and teaching its indispensable secrets to living a successful, happy, and meaningful life. Obviously, the greatest reward for yefutzu mayonosech chutza is the coming of Moshiach. But why shouldn’t we demonstrate the value of applying Chassidus on material terms by awarding the winners with a respectable prize? Besides, who wouldn’t want to get paid to change the world? We are confident that this contest will stimulate and elicit a strong response. Our ultimate goal is that the applied Chassidus this initiative will produce will make a significant contribution in the work in fulfilling the mission of the Rebbeim: Bringing Moshiach through spreading the wellsprings of Chassidus outward!”

*The judges will not know the identity of the entrant when reading and evaluating an essay submission.

To view the contest rules and guidelines or submit an essay, visit www.meaningfullife.com/mylife/contest. All submissions are due by midnight February 19.