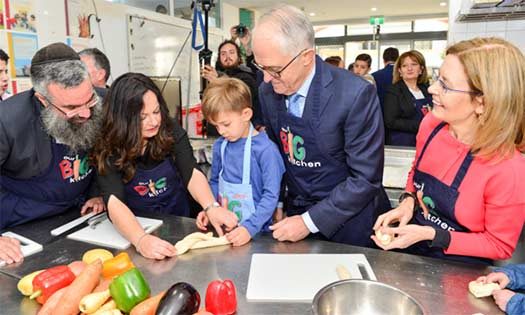 Jack, like the dough, rose to the occasion and went home with the fruits of his labour.

The prime minister brought a gift with him as well, a $48,000 grant to improve security arrangements for the Harry Triguboff Centre in Flood St  which currently under  renovation.

While Jack learned about baking and cooking, his grandfather was taken on a tour by benefactor Harry Triguboff, his granddaughters Orna Triguboff and Ella Lizor, as well as Rabbi Dovid Slavin.

First stop was the synagogue which is expected to be complete in time for Rosh Hashanah before visiting the refurbished mikveh.

Then it was an inspection of the newly renovated Yeshiva College which houses around 100  students.

One of its main features is the Joseph Triguboff Assembly Hall named after Harry Triguboff’s brother.

The tour over, Malcolm Turnbull joined Jack in the kitchen where 150 people were busy preparing food to be distributed to the needy.

Joined by local state MP Gabrielle Upton, Jack and his grandfather quickly learned the rudiments of challah making from Rebbetzin Laya Slavin and then prepared vegetables.

Later, prime minister Malcolm Turnbull made the public announcement of the new grant. In introducing him, Rabbi Slavin said that the prime minister, in which electorate The Harry Triguboff Centre is located, had been a visitor many times…but this is the first time as prime minister. He also presented an OBK apron to Jack with another for his sister. The four-yr-old chipped in: “But my mum can use it.” Rabbi Slavin presented Malcolm Turnbull a book on the Lubavitcher Rebbe saying: “The Rebbe is the  inspiration for all we do in OBK and the Yeshiva.”

Prime Minister Malcolm Turnbull said that the generosity given by Harry Triguboff not to just the Centre but the whole community is “extraordinary”.

He said: “This is phenomenal. This is what it is all about. When we are loving and generous, this is when we are closest to God. The love you share here is very important.

The prime minister said that governments have access to funds and the provide funding for social services. He went on to say if individuals give only one dollar, or millions such as Harry Triguboff or give time..those donations come with love.

He said: “Our Big Kitchen is an exercise in practical love”.

Malcolm Turnbull referred to the governments Safer Communities Fund saying: “We are delighted to announce that we have  $48,000 going to Our Big Kitchen to provide initial security, CCTV and general measures to make this wonderful place safe and sound.”

Following the usual flurry of selfies, Malcolm Turnbull and his four-yr-old Jack left with their challahs and warm memories of cooking with OBK’s supporters including other grandparents, parents…and the children.