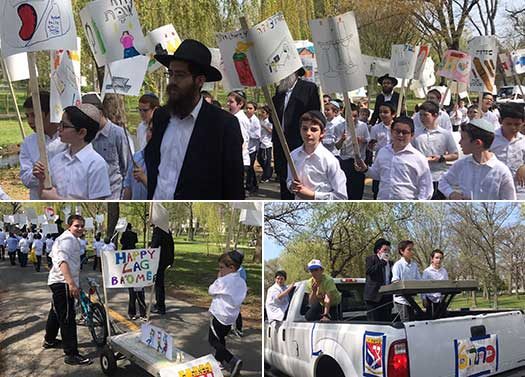 Cheder at the Ohel had a beautiful Lag Ba’Omer celebration. The boys all made posters and marched in the street and through the park with police escorts. A nice group of parents joined the march as well.

Students Chaim Yanni and Shlomo Matusof, both talented musicians played in the back of a float. The 7th grade made a float of their own. They wore costumes and entertained all.

At the park, students, staff, parents and the girls Cheder as well joined as principal Rabbi Margolis spoke. He then called on the boys to get up on stage and recite the 12 Pesukim.

After the parade the boys had fun games and relay races in the park. The games were run by the 7th grade students.

The boys got drinks, snacks, ices and bow and arrows for Lag Ba’Omer.

The event was organized and sponsored by Mrs. Henny Preger and the Cheder PTA.