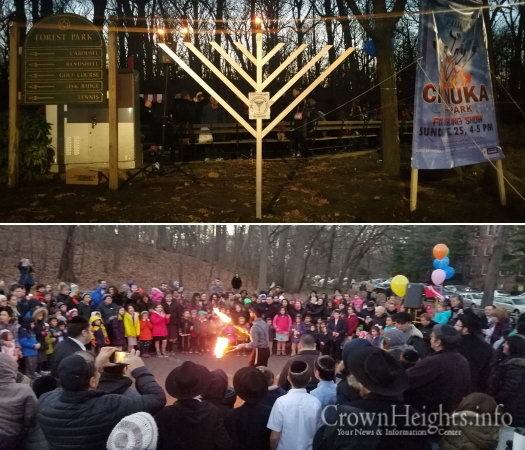 Warmer than usual weather had those from near and far coming together to celebrate Chanukah with Chabad of Kew Gardens, Queens.

Over 300 revelers unified together at the annual Chanukah in the Park, held at Wallenberg Square. The participants enjoyed hot coffee, fresh donuts and sizzling latkes, while the children were entertained with Chanukah games and crafts. Mark, a resident noted, “In all my years living in Kew Gardens, I’ve never seen such a large crowd gather for any event, let alone a Jewish event”. A tank full of bochrim from Ohr Menachem led by Rabbi Zalman Goodman where on hand with their mivtzoim booth giving out Menorah kits and helping guests put on Tefillin.

The official program began with a children’s rally led by Rabbi Chaim Eilenberg. Many regulars of the “Kew Gardens Tzivot Hashem club” and “Mommy and Me” who have familiarized themselves with all the 12 pesukim, were called to the podium to lead the crowd. All eyes were then glued to a spectacular show by the master fire juggler.

Rabbi Shmuel Tuvel then addressed the crowd about the lessons of Chanukah. Tying together a famous parable about a little light dispels much darkness, with the story of Yosef Hatzadik’s experiences in an Eygyption prison, the audience were inspired to do a little more to hasten the coming of moshiach.

The climax of the evening was the giant menorah lighting, followed by the singing of Haneirot Halalu, when the men formed a circle and broke into a joyous dance accompanied by lively festive Chasidic music.