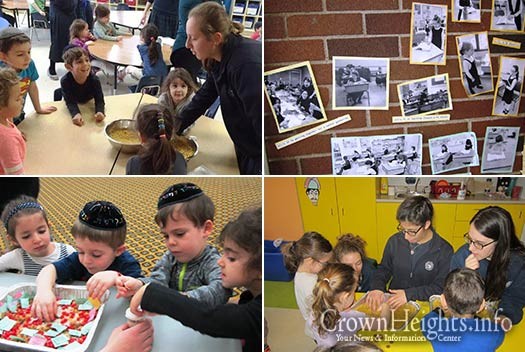 Recognizing the significance of having the opportunity to celebrate Tes Adar Sheni in a year that actually has an Adar Sheni, coupled with the fact that this is a Shnas Hakhel, Bais Rivkah of Montreal decided to something special this year.

The goal was to impress upon their elementary and high school students the realization that history is not a series of events relegated to the past. It is essential for children to be aware that our lives TODAY would be TOTALLY different, if it were not for the holy work of our Rebbeim in the past.

When the Frierdiker Rebbe arrived to the safe shores of America, at the height of the devastation of Yiddishkeit in Europe during WWll, he was confronted with a spiritual wasteland in America. Yiddishkeit was being strangled by the concept that Torah and Mitzvos could not be practiced here, in America. The Frierdiker Rebbe, staunchly declared that America Iz Nisht Andersh and that the beauty of Yiddishkeit could be transplanted and made to thrive in North America.

One does not want to think about what the Jewish face of the lower hemisphere of the world (as well as the entire world) would look like, without the courageous work of the Frierdiker Rebbe, and the subsequent intensification of his Avodas Hakodesh by the Rebbe!

The Morahs of the elementary school took touching photos of their students enthusiastically involved in a variety of Mitzvos, that prove how successful the work of our Rebbeim is. The photos show children Davening, giving Tzedakah, participating in Hakhel farbrengens, learning etc. Most yidden, at the time of the arrival of the Frierdiker Rebbe, would not have imagined that seventy six years after the Rebbe’s arrival, Yiddishkeit would be blossoming, not merely trying to survive. The Morahs want their talmidos to know that they have the zchus of being the living proof of the Hatzlocha of the work of our Rebbeim. Some of these photos and a beautiful banner are prominently displayed in the lobby of the school.

The High School girls of grade 9 to 11 spread this message in a variety of Jewish schools in Montreal. Over three-hundred-fifty children were reached, and the students and their teachers were very affected. The students played games specifically geared to teach school children about the Mitzvos of Purim. These original games were formulated in a manner that would encourage the children to utilize their cognitive and motor skills.

In order to spread the message of Hakhel, a special two-sided Hakhel coloring page was prepared. One side was a brief explanation of Hakhel, so that the children could take home the message of Hakhel; the other side was a picture depiction of Hakhel in the Bais Hamikdosh. Each child received a set of boy and girl paper doll “mentchies”, that they pasted onto the picture. They colored the “mentchies”, and were told to imagine that the paper cut-outs represented themselves and their families participating in Hakhel in the Bais Hamikdosh.

How successful were the High School girls? The schools without exception wanted to know when they would return to do another program!

Yes indeed, America Iz Nisht Andersh, and the staff and students of Bais Rivkah of Montreal felt so privileged to prove, that Yidden from all backgrounds are receptive to this message! Looking at the faces of the girls as they returned from this uplifting experience, it was obvious that they were thinking: Rebbe, we hope we gave you nachas and we’ll continue to do so!