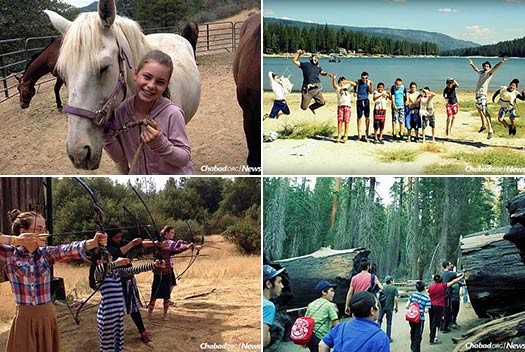 For Camp Gan Yisroel West in California, its second season on their new premises sees more activities and growing enrollment in a summer programs for girls and boys.

A lake ripples gently in the breeze, framed by towering conifers and peaks of the Sierra Nevada. Situated at the geographical midpoint of California, this exquisite locale waits in eager anticipation for summer to arrive, when the gleeful shouts of children will harmonize with the sounds of nature already in play.

This is the site of Gan Yisroel West in North Fork, Calif.

Rabbi Shlomo and Aliza Menkes – Shluchim in Santa Monica, California, and founders of the camp – couldn’t be happier with the new location. Conveniently, it’s about equidistant from the state’s two major cities of San Francisco and Los Angeles.

“It’s a beautiful, beautiful place,” says the rabbi. Residents of the beachfront city of Santa Monica since the early 1980s, the Chabad-Lubavitch emissaries have long been searching for a permanent, viable site that would suit the camp’s needs.

No strangers to the camp scene, the couple has been operating different summer programs since 1995 on various rented premises. “In all this time, I was actively looking for a property that would accommodate the needs of our camp,” explains Menkes.

When it became known to him that Madera County was putting the Putney Ranch Camp up for sale in the summer of 2013, they wasted no time in joining the bidding. The rabbi successfully outbid the competition and closed escrow last May.

This will be the second summer welcoming campers to the newly acquired grounds. Dubbed the Siderman Family Camp & Conference Center, the site was dedicated by Carlos Siderman, president of Property ID Corporation.

A Host of Activities

Menkes says the Jewish summer-camp experience has always been a passion of his: “It is the single most obvious way to preserve Jewish continuity in America.” As such, he and his wife have accordingly sought to create a camp atmosphere that would most capitalize on this opportunity.

“I made a commitment [several years ago] on Gimmel Tammuz”—the yahrtzeit (anniversary of passing) of the Lubavitcher Rebbe, Rabbi Menachem M. Schneerson, of righteous memory—“to establish a sleepaway camp in California that would carry out the Rebbe’s vision of every Jewish child going to summer camp,” explains Menkes.

Now that they finally have a place to call home, the husband-and-wife team can blend more than 15 years of camp experience with breathtaking physical space, oodles of amenities and activities, and their trademark dedication to inspiring spiritual passion in their campers.

Boasting waterfront access to Manzanita Lake and some 95-plus acres of lush scenery, including two magnificent Sequoia trees, the camp’s location is a sight to behold. “We’re close to an area that sees about 1.5 to 2 million tourists a year because we’re near Yosemite,” notes the rabbi—one of the most popular U.S. national parks in the country.

The lake affords numerous opportunities for sports and entertainment, including fishing, kayaking, and of course, swimming, complete with a new rope swing that lands campers in the water with a splash. The tranquil atmosphere remains undisturbed by noisy motorboats, and serves as a great place for campers and counselors alike to sit and relax. On the ground, there’s Frisbee golf, a climbing wall, an archery range, fire pits, an outdoor amphitheater and plenty of hiking trails. There are animals, too: two each of free-range goats and alpacas, as well as a stable full of horses.

“We’ve incorporated a thorough horseback-riding program,” says the rabbi, having recently discovered what he calls a “breathtaking 10-mile trail” that ends near Bass Lake and the resorts in the area.

Still, getting the facility up to par was no easy feat.

“We’ve been actively working on improving it to bring it up to a higher standard than it was when we had purchased it,” says Menkes. The place was old; buildings required refurbishing and painting. Renovations served both safety and aesthetic purposes. A redwood deck, for instance, was constructed to overlook the stunning scenic view, including the Sequoias.

After all the necessary camp improvements are completed, the goal is to build a conference center on the premises to serve as a year-round available space for meetings, events and other functions.

On the heels of the Chabad couple’s first summer—with 26 girls in the first session and 46 boys in the second—camp enrollment for this coming summer has ballooned. The girls’ session is sold out (at their maximum capacity of 52), with the boys’ numbers close behind. With eager children on the waiting list, the Menkes hope that their additional accommodations for 70 campers will be completed on time for the start of camp.

First and foremost, states Rabbi Menkes, is the staff’s motivation to give the kids the “absolute best summer of their lives.” They do that partially through having children do what they like best. For example, Aliza Menkes notes that many camps focus on sports when a significant portion of children may not be so interested in them. While sports are indeed offered at Gan Yisroel West, plenty of other activities are available that suit other tastes.

Secondly, location works in their favor. “I believe that when you don’t have rain on a regular basis, it makes a difference,” she adds. Many camps in the country have to compete with inconvenient summer weather—rain and storms, and even extreme heat—relegating activities to the indoors.

All in all, “we work very hard to make every single camper feel special,” she says.

And special is something they are used to—something that brought them to the new campgrounds in the first place, they say.

“There were many miracles that happened with the purchase of this property,” relates the rabbi. While initially searching unsuccessfully for a new location, Carlos Siderman informed the rabbi of another avenue to try. Menkes discovered the Putney Ranch Camp that same day.

Another experience revolved around the search for a self-sustaining water source. After drilling for an expensive number of hours, the couple was faced with the decision to continue or quit. That day, which just so happened to be the anniversary of the Rebbe’s birth, Rabbi Menkes offered up a prayer for success in his venture.

About a half-hour later, they discovered enough water to supply the camp with what it needs—and then some.

“I really, truly believe that we were directed to this location for a reason,” attests the rabbi, “and we are taking full advantage of that and hope to continue to grow.