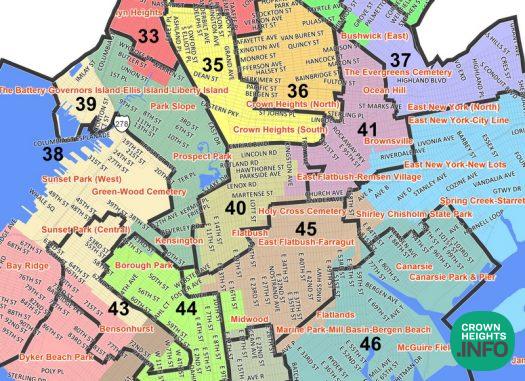 The New York City Districting Commission voted on a preliminary plan for new City Council districts. The Preliminary Plan is comprised of newly drawn maps of each of the city’s 51 Council districts, and leaves Crown Heights divided.

Highlights of the new preliminary plan are being praised including an Asian opportunity district in South Brooklyn which will cover parts of Sunset Park, Dyker Heights, and Bensonhurst. The Asian Voting Age Population in this district is approximately 57 percent.

For the Jewish communities of Brooklyn, little has changed, with Crown Heights remaining divided along Empire Blvd between the 35th and 40th districts. Most significantly, Borough Park appears to be facing a new political reality with the new Asian District completely breaking up the district.

A new plan is drawn every ten years following the U.S. Census, with the Commission required to follow all regi;ations included in federal, state, and city law.

The city’s population grew 8.2 million in 2010 to 8.8 million in 2020, according to the Census. To reflect this increase and bring the city in line with federal, state, and local laws the new plan raises the average number of residents per district from 160,710 to 172,882.

The independent Districting Commission voted on the new preliminary plan on Friday after receiving public testimony from nearly 500 city residents at public hearings held from May through July in each of the five boroughs. Testimony was heard in person and received via Zoom and email.

The maps are available for public review online at nyc.gov/districting and a physical copy will be displayed at the Surrogate’s Court 31 Chambers Street.

Next the Commission will hold another five hearings in each of the boroughs to get public testimony on these new maps. The hearings are scheduled for Aug. 15, 16, 17, 18, and 22. Testimony also may be provided via Zoom during the public hearings, by email at publictestimony@redistricting.nyc.gov, and by mail at 235 Broadway, NY, NY 10007.