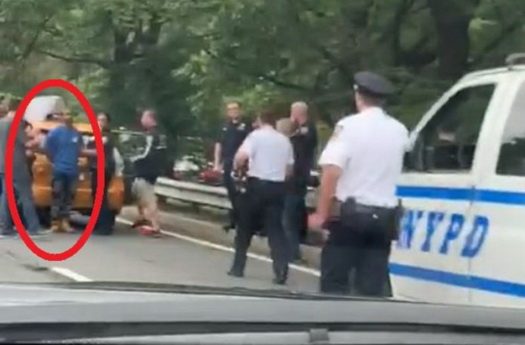 A man robbed a bank on 12 Avenue and West 29 Street on Wednesday afternoon, and the NYPD moved fast to apprehend him.

The traffic on the George Washington bridge had already been slowed down by cops, and officers were placed at intersections and exits from Manhattan highways.

Officers literally went car-to-car until they located their suspect at West 94 Street and the Henry Hudson Parkway.

Footage provided to YWN shows the man standing next to a yellow cab. It is possible that he took a cab when fleeing the scene.

No further details were immediately available.

IN CUSTODY! #NYPD has the bank robbery suspect in custody on W 94 Street and Henry Hudson Parkway. The robbery was at a bank on 12 Avenue and W 29 Street. NYPD had the entire highway shut and were going car to car tracking a die pack. https://t.co/86yeiKqcku