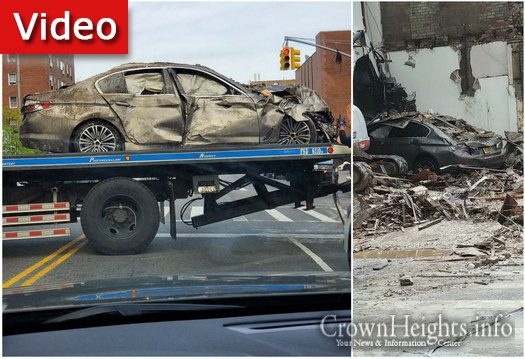 The car that that drove nose first into a building in Brooklyn was finally removed Friday. Its broken shell shows the miracle that the driver was able to escape it.

As previously reported on CrownHeights.info, a car driving at high speed slammed into a building in Brooklyn this past Monday night, causing the building to collapse on the car.

The accident occurred around 11:30pm at the corner of Ave P and East 5th St.

The driver of the vehicle fled the scene on foot, but was quickly caught by Shomrim of Boro Park and Flatbush.

The car was finally removed from the wreckage of the building Friday, and its battered and destroyed shell dhows the miracle that allowed the driver to escape.