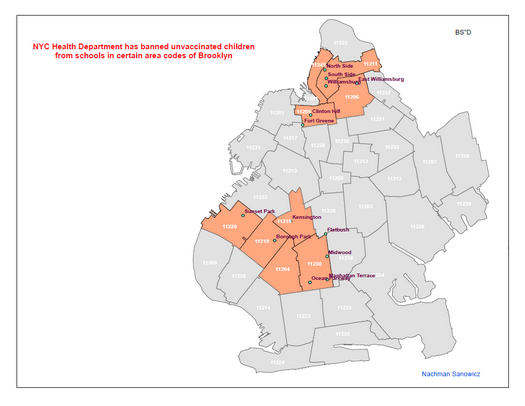 The NYC Health Department has come out with a strong new policy as they work to contain the current measles outbreak. Part of the statement given to YWN reads “Effective Friday, December 7th, every student attending a Yeshiva in the below zip codes who is not vaccinated will not be permitted to attend school, regardless of whether a case of measles has occurred in the school”. Just a few days ago, YWN spoke with Dr. Jane R. Zucker, the Assistant Commissioner for the Bureau of Immunization at the NYC Department of Health who said that there are now 39 confirmed cases. All of the cases are in Brooklyn – 15 of them are in Williamsburg, 21 are in Boro Park, 1 in Bensonhurst, 1 in Marine Park.

“Besides for five cases being adults, the rest are all children under the age of five, Dr Zucker told YWN”.

Dr. Zucker told YWN that they suspect there are many additional cases that have not been properly reported.

NYC Councilman Kalman Yeger, who represents Boro Park, Midwood, and Bensonhurst gave the following statement to YWN after learning of the new policy:

“I’m grateful to Mayor de Blasio and his team at the Department of Health for their immediate actions to protect our community’s children. This is a clear issue of pikuach nefesh. It is imperative that parents immediately vaccinate their children. It is just as imperative that our parents and yeshivas take all the necessary precautions to keep unvaccinated children away from harm. For this reason, DOH must take this drastic step to require unvaccinated children to be excluded from school until they receive the required vaccinations or the crisis has passed.”

Here is the full statement by the NYC health Department: Meanwhile, Rockland County Health Commissioner Dr. Patricia Schnabel Ruppert told YWN that as of December 6, there are 89 confirmed reported cases of measles in the county.

In Lakewood, the Ocean County Health Department tell YWN that:
• There are now 18 confirmed measles cases.
• There are also 7 potential cases under investigation.
• Vaccination is encouraged and those children involved with exposure to a confirmed case may be subject to an order of exclusion, if unvaccinated.
• The Ocean County Health Department continues to support and highly encourage the exclusion of non-vaccinated children from schools, preschools and daycares in the outbreak area. These entities have the authority to make that decision when an outbreak has been declared by the New Jersey Department of Health. The age range so far for the current outbreak is 6 months to 59 years old.

In the City of Passaic, there are three confirmed cases in one household.

Earlier on Thursday, YWN published that in the London UK Chareidi community there are at least 60 confirmed cases.

There are also cases in Kiryas Joel in Orange County, NY.