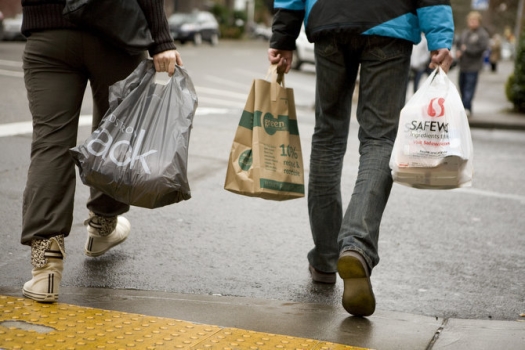 Championed by Senator Simcha Felder (Brooklyn) and Assemblyman Michael Cusick (Staten Island), the Senate bill S.7336 will amend the general city law in relation to prohibiting the imposition of any tax, fee or local charge on carry-out merchandise bags.

The bill was introduced by Felder after what the Senator considered an unjust effort by the City Council to impose its will on a majority of New Yorkers who disagreed with the measure.

“The last thing New Yorkers need is another regressive tax,” said Felder when he introduced his bill.

Standing with Assemblyman Cusick and flanked by his colleagues in the Senate, including Senators Marty Golden (Brooklyn), Roxanne Persaud (Brooklyn) and Diane Savino (Staten Island), Felder introduced his bill at a press conference last month and initiated an on-line Stop the Bag Tax petition, which allowed his constituents and other New Yorkers to weigh in on the issue.

Felder began fighting the bag tax as a member of the NY City Council, when the measure was introduced in 2008. “I’ve been disgusted every time I’ve heard the absurd plastic bag tax legislation introduced,” he said. “New York City has to stop nickel and diming New Yorkers. This tax placed an undue financial burden on countless low- and middle-income residents who already struggle.”

Following today’s vote, Felder thanked his colleagues in the Senate for passing his bill. “I appreciate the support that we had today, but I wasn’t surprised by the outcome because my colleagues have followed this issue closely and heard the concerns of New Yorkers far and wide,” he said.

The Senator noted that Assemblyman Cusick is now leading the charge in the Assembly where the bill has already passed the Cities Committee. “I’m hopeful that the bill will now pass in the Assembly,” he said.