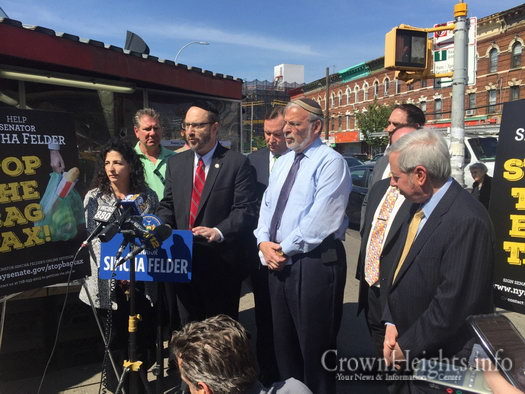 New York State Senator Simcha Felder and Assemblyman Michael Cusick are seeking to overturn the NY City Council’s recent passage of a plastic bag tax. Felder, Cusick and many of their colleagues held a press conference today asking New Yorkers to sign an on-line petition and encourage their elected officials in Albany to support the Felder-Cusick’s bill (S.7336) to protect New Yorkers from taxes or fees on the use of carryout bags.

Assemblyman Cusick declared, “As the Assembly Member who represents and helped to close the former Fresh Kills Landfill, I am all too familiar with the harm that improperly disposed plastic bags do to our environment and to the cleanliness of our communities. However, a charge for plastic and paper bags in the City of New York will not solve this problem; instead it is a misguided attempt that will only squeeze more money from the hardworking families of our City.”

Senator Marty Golden said, “We need less taxes, not more taxes, and this bag tax impact’s our community’s heart: our families, our seniors and our small businesses.”

Senator Roxanne Persaud said, “The plastic bag tax will burden New Yorkers that are already in a vicarious economic situation and provide undue hardship to those who cannot afford to spend the extra money per bag. New Yorkers should not have to sacrifice the purchase of more groceries because they have to pay tax on their grocery bags.”

State Senator Diane J. Savino said, “Environmental Policy only works when we all participate towards the effort, that’s why this plan doesn’t. We support the idea of reducing the use of plastic bags, but it can’t be some bags in some stores for some folks, but not all folks. Most importantly, the fees should help the recycling effort, not bolster the store’s bottom line!”

Assemblyman Peter Abbate said, “I stand today strongly opposed to the 5 cent fee for plastic and paper bags that passed the NYC Council last week. This is another misguided and invasive mandate on the residents of Brooklyn and of the five boroughs that will disproportionately affect low and middle income families. Instead of this regressive tax and fee, the City of New York should encourage consumers to recycle and reuse their plastic bags and promote recycling programs that currently exist.”

Assemblyman Ron Castorina said, “I’m proud to join Assemblyman Cusick and my fellow elected officials in fighting against this misguided attack on middle class families. Not only does it regressively impact our hardest-working families, it also provides no public value by allowing stores to pocket the surcharge for themselves.”

Assemblyman Michael DenDekker said, “As a former member of the Department of Sanitation, I am very sensitive to the need to remove plastic bags from our waste stream. Unfortunately, a bag fee is not the most efficient way to do this, and worst of all it represents a regressive tax on hardworking New Yorkers. Bag fees add up, and while people at higher income levels may not be affected by an extra quarter on their weekly grocery bill, there are many New Yorkers for whom this is a serious problem. Moreover, because the extra fee goes directly to businesses, the bags represent an extra source of revenue, and there is no incentive for storeowners or cashiers to actually reduce the number of bags they give to consumers. There is no question that we create entirely too much plastic bag waste in the city of New York. But we need to work to reduce this waste in a way that is more efficient and less costly to New Yorkers than a bag fee.”

Assemblyman Dov Hikind said, “I’m outraged that the average New Yorker will be set back even further with a five-cent charge for grocery bags. There are so many families that struggle to pay for their groceries in and of itself, and forcing New Yorkers to choose between paying a fee and bringing reusable bags every time they go to the supermarket will undoubtedly burden them even more. The role of government is to work for the people, not against them.”

Assemblyman Michael Simanowitz said, “The proposed plastic bag fee is nothing more than a regressive tax that will hurt millions of New Yorkers. In a city with an already high cost of living, it is outrageous to make it more expensive for people to feed their families. I stand with Assemblyman Cusick and Senator Felder’s efforts to end this fee and ensure that our residents aren’t burdened with yet another unnecessary tax.”

The bill has broad bipartisan support.

Senator Felder and Assemblyman Cusick will hold a public hearing on their Plastic Bag Bill at 250 Broadway in New York City (the State Office Building) on May 20.

The public is encouraged to visit https://www.nysenate.gov/petitions/simcha-felder/stop-bag-tax-petition, where they can sign the petition.