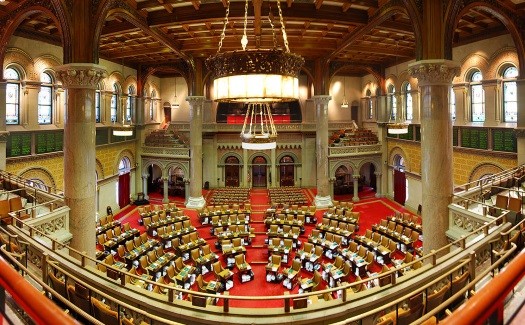 Despite assurances by the newly appointed state Assembly speaker that he would support the Education Investment Tax Credit just two weeks ago, the proposed budget released today by the Assembly fails to include the bill which would bring desperately needed tuition relief to parents of yeshiva students statewide.

Speaker Carl Heastie voiced his support for the EITC at a meet and greet with members of the Jewish community arranged by Assemblyman Dov Hikind in Borough Park.  Opposition to the EITC in the assembly is nothing new according to Hikind, but State Senator Simcha Felder slammed the Assembly for ignoring private school parents statewide, calling the omission “a slap in the face.”

“There are a significant number of parents, from the Jewish community and otherwise, who are suffering and having a hard time making ends meet,” Felder told VIN News.  “Many Assembly members spoke about the significance of this bill but it still wasn’t enough of a priority to put the EITC in the budget.”

Finalizing the state budget is a negotiation-filled process with lawmakers working off of three different budgets prepared by the governor, the Senate and the Assembly.  Felder said that the Senate’s budget, which will be passed this week, will include funding for the EITC.  The state budget prepared by Governor Cuomo in January includes the EITC, but bundles it together with the Dream Act which would provide tuition assistance to undocumented immigrant college students.

A final budget for the state will be hammered out in Albany over the next two and a half weeks and Felder is hopeful that a newly created petition will help sway lawmakers in favor of the EITC.

“There are pages and pages in the budget, but there is significant stuff, like minimum wage, the Dream Act and the EITC which will all be debated,” said Felder.  “We need to get this petition drive going to pressure the Assembly and the governor to make sure that the final budget includes the EITC.”

Despite the Assembly’s failure to include the EITC in its budget, Hikind noted that as of today 76 out of the Assembly’s 150 members are in favor of the EITC and said that he is cautiously optimistic that the measure will be included in the state’s final budget.

“I wish it had made it into the Assembly budget, but with Hashem’s help, it will still pass,” said Hikind.  “The next two and a half weeks are critical.  We are all pushing and there are many people here who are doing everything humanly possible to get the EITC included into the final budget, the one that really counts.”

Rabbi Shmuel Lefkowitz, vice president at Agudath Israel of America, said that the Assembly’s omission of the EITC came as no surprise.

“There has been very, very vocal opposition to the EITC for years but we have strong support in the Senate and have been meeting with a lot of Assembly members, and with the right timing, they could go along with the bill,” said Rabbi Lefkowitz.  “It is very realistic to say that the EITC could happen in the budget and we are hoping for a positive outcome.”