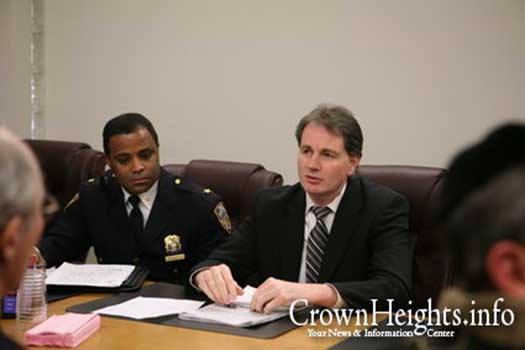 Chief Philip Banks III (left) at a meeting on community relations in the Jewish Children's Museum on January 22nd 2008.

Police Commissioner Raymond W. Kelly announced today the appointment of Philip Banks III as the NYPD’s new Chief of Department. The 26-year veteran of the force and its current Chief of Community Affairs will be officially installed as the Department’s highest ranking uniformed officer in promotion ceremonies at Police Headquarters.

“Phil Banks has proven himself time and again to be as outstanding a field commander, adept in managing police personnel and operations, as he has a consummate builder of community relations whose robust School Safety and Juvenile Justice Divisions, as well as New-Immigrant Outreach and Crime Prevention programs, flourished under his command.” Commissioner Kelly said.

Chief Banks, 50,  joined the New York City Police Department in July 1986, and began his career on patrol in the 81st Precinct. He was promoted to Sergeant in March 1994; Lieutenant in May 1997; Captain in September 1999; Deputy Inspector in June 2001; Inspector in December 2003; Deputy Chief in December 2006; and Assistant Chief in June 2009. He has served in the 70th, 73rd, 79th, 81st, 90th and Central Park Precincts, Patrol Borough Brooklyn South, the Harbor Unit, and the School Safety Division Investigations Unit.

Chief Banks holds a Bachelor of Science degree in Business Administration from Lincoln University, the historically black university in Pennsylvania, whose alumni include Langston Hughes and Thurgood Marshall. Chief Banks is also a 2001 graduate of the Police Management Institute at Columbia University, and more recently completed advanced management training for Senior Executives in State and Local Government at Harvard University’s John F. Kennedy School of Government and the Executive Leaders Program in Counterterrorism at the Naval Postgraduate School, Center for Homeland Defense and Security, in Monterey, California.

He resides in St. Albans, Queens with his wife of 24 years, Vonda. The couple has three children: Philip, Jenai, and Elijah.

Chief Banks is a also member of the founding chapter of the philanthropic institution, 100 Black Men, Inc., whose past president is Philip Banks, Jr., Chief Banks’s father who retired as a lieutenant in the New York City Police Department after more than 26 years of service which included co-director of the Police Commissioner’s security detail, Executive Officer in the Bias Crimes Unit, and Commanding Officer of the Recruitment Section.

Chief Banks succeeds Chief Joseph Esposito, who retired. He becomes the 37th individual to hold the post, which prior to 1973 was known as the Chief of Operations and before 1973 as Chief Inspector.