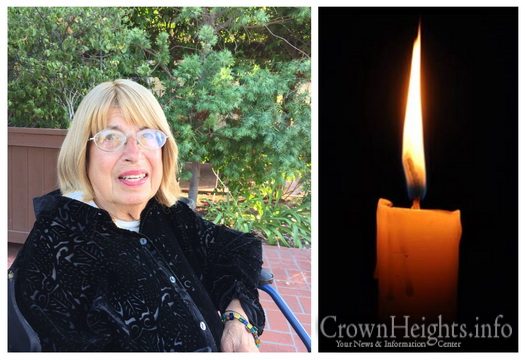 With great sadness, we announce the passing of Mrs. Reitza Kosofsky OBM of Chicago and S. Monica. She was 88 years old.

Mrs. Kosofsky was born in Chicago in 1932 to Benyamin and Jennie Kushner. As a child, she convinced her parents to sign her up for the Hebrew Parochial School.

Mrs. Kosofsky was a pioneer of the Anash community in Chicago. She joined Nshei Chabad in the 1950s, and worked closely with Rebbetzin Hecht and Rebbetzin Shusterman. When Rabbi Daniel Moscowitz moved to Chicago and hired more shluchim, Mr. and Mrs. Kosofsky helped with whatever was needed.

More recently, she was a devoted member of Mrs. Turen’s tanya class. Over the years, Mrs. Kosofsky received many kiruvim from the Rebbe.

For many years, Mrs. Kosofsky and her husband were looked up to by many members of Chicago’s growing number of Anash. Young shluchim and baalei teshuva turned to her and her husband for all kinds of help and advice.

She dedicated her life to helping others. Rabbi Aron Wolf of Chicago Mitzvah Campaign says, “Mr. and Mrs. Kosofsky went on mivtzaim every holiday. On Chanukah and Purim they visited facilities for seniors. When people needed meals for Shabbos, I would call them first. They never said, ‘No.’”

One shliach commented that there was not one aspect of Chabad in Chicago in which Mr. and Mrs. Kosofsky were not involved.

People knew they could find a sympathetic ear and an open door at her house. Mrs. Kosofsky helped people because the need was there.

Mrs. Kosofsky’s daughter once met a young woman in shul who had grown up in Chicago. The young woman told that her parents had immigrated to Chicago from Eastern Europe, and her mother found herself pregnant, without financial support. She planned to abort the baby. Mrs. Kosofsky met the young woman on the street and sensed something was wrong. She brought her into the FREE office and convinced her to have the baby and not have an abortion. That baby grew up and raised a frum family.

Another woman was in need of a “get”, and her husband refused to give one. Mrs. Kosofsky counseled and encouraged the woman for several years until the husband finally relented.

A couple once came to her, telling her they were getting divorced. Her granddaughter, who was in the house, remembers Mrs. Kosofsky told them they owe their children to stay together. After several hours of discussion, the couple left the house committed to make the marriage work.

In the early 1970s, the Soviet Union opened its doors, and thousands of immigrants arrived in Chicago from Eastern Europe. Under guidance of the Rebbe, Mrs. Kosofsky founded the Chicago chapter of FREE (Friends of Refugees of Eastern Europe). She helped people find apartments and jobs, opened a resale shop, and started a Hebrew school and even a day school for the refugees. She arranged thousands of brissim for the immigrants.

Her phone rang day and night from the refugees asking for help, from employees of FREE, and numerous volunteers. It was during this time that her three youngest children were born. She says she ran FREE from her kitchen with the phone on her shoulder, a baby in one hand, while cooking dinner.

She brought many bachurim who spoke Russian to Chicago to help for several weeks at a time. Among these were Rabbi Betzalel Schiff, Rabbi Zaltsman, and Rabbi Meir Okonoff. Many of these rabbis are shluchim in cities around the world.

Eventually, she hired Rabbi Shmuel Notik to be director of FREE. She remained active in the organization as long as she was physically able, and continued as its president. The connection came full circle when a daughter of Rabbi Notik married Mrs. Kosofsky’s grandson many years later.

Many rabbis and mashpiim who came to Chicago to raise funds stayed at her house. Students from the high school and counselors at Camp Gan Yisrael knew they had an open door where they could hang out and work on projects at the Kosofskys.

In 2014, she and her husband moved in with their daughter and son-in-law, shluchim to Simcha Monica, CA.

Her husband passed earlier this year. She was predeceased by a great-granddaughter, Miriam Baila Goldzweig, and a great-grandson, Yehoshua Binyamin Cyrulnik.
Mr. and Mrs. Kosofsky were privileged to raise a large family of children, grandchildren, and great-grandchildren who are Chasidisher yungaleit, many of whom are on shlichus in cities around the world. 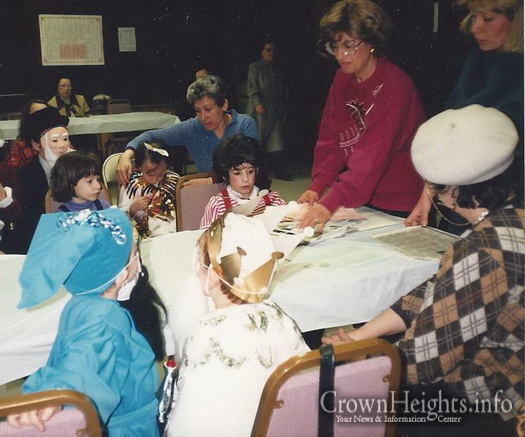 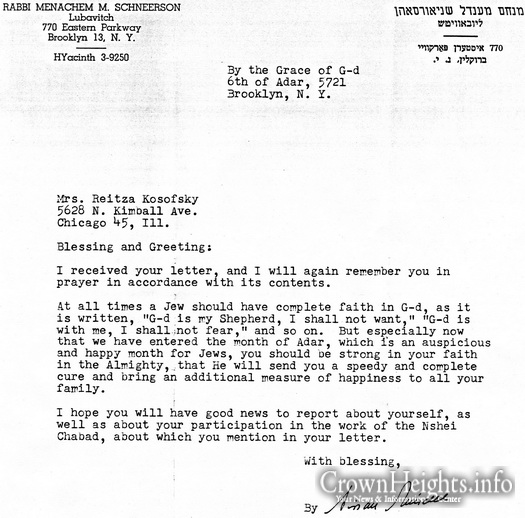 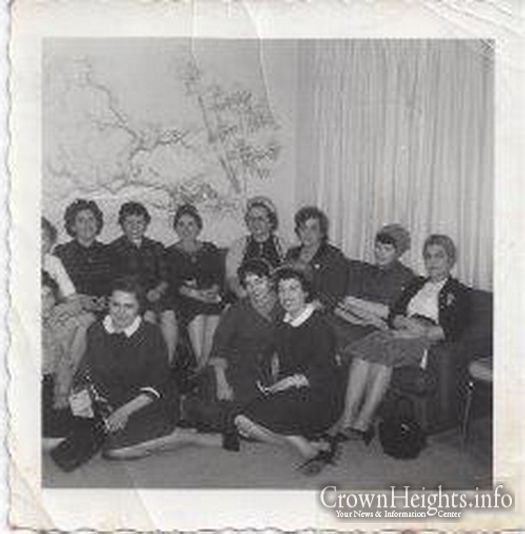