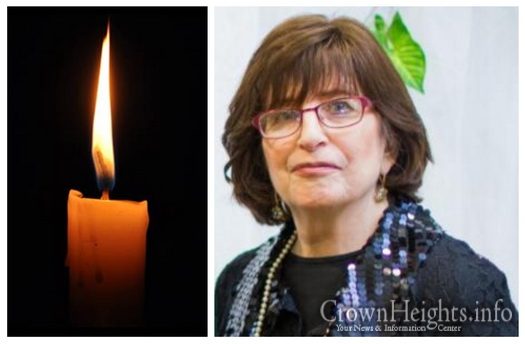 With great sadness we report the passing of Mrs. Chana Etka Feldman OBM,who served as the principal of Bais Rivkah primary for over forty years at the directive of the Rebbe. She passed away early this morning, on Shabbos Parshas Chayei Sara, the 27th of Cheshvan 5781.

Mrs. Feldman was born in Montreal, Canada to her parents Yakov Chaim and Rikel Rosenblum, who had emigrated from Poland after WWI.

At the young age of 10, Mrs. Feldman moved to Crown Heights to live with her sister, Sara Kahanov and her family. At that time, the young Mrs. Feldman was zoiche to a yechidus with the Rebbe during Chanukah, where the Rebbe asked her if her parents gave her Chanukah gelt. She answered that she had received a nickel from her father. The Rebbe replied that that’s not enough, and gave her a silver dollar.

In 1974, Mrs. Feldman asked to fill the position of assistant principal of the primary division of Bais Rivka in Crown Heights. Being a full-time mother with a baby at home, Mrs. Feldman wasn’t sure if she should accept and wrote to the Rebbe. “How can I take this job if I have a baby?” she asked. The Rebbe answered,
“וואס איז די אונטערשייד אויב זי וועט שלאפן ביי דיר אדער ביי די babysitter?”
(What’s the difference if the baby will sleep with you or at the babysitter?) And since then, Mrs. Feldman devoted her heart and soul to Bais Rivka, which she fondly referred to as “The Rebbe’s Moised.”

Mrs. Feldman was an outstanding wife, mother, grandmother and מכניס אורח. For many years, she hosted, nurtured, and tended to the every need of shluchim grandchildren who lived with her from a young age so they could receive a chinuch al taharas hakodesh. She took pride in the shlichus of her children and actively participated in their work.

She is survived by her sister Mrs. Sara Miriam Kahanov and her brother Rabbi Velvel Rosenblum of Crown Heights.

Mrs. Kahanov is not aware of her sister’s passing and the family asks that no one mention this to her.