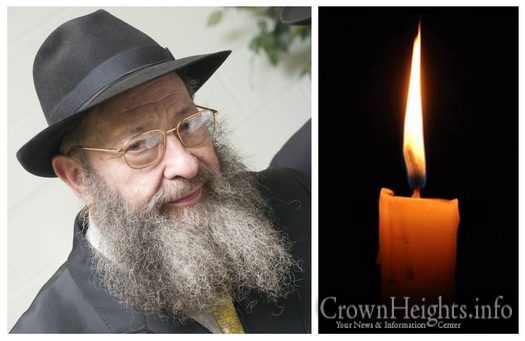 With great sadness we report the passing of Mr. Yitzchok Kosofsky OBM. He passed away on Erev Pesach, the 14th of Nissan, 5780, of overall health complications after entering the hospital several months ago.

Mr. Kosofsky was born in 1931 in Chicago, IL, to traditional Jewish immigrant parents. They sent him to the Talmud Torah of Cong. Bnai Reuven, a Lubavitch shul. Under the direction of Rabbi Flyer, the boys learned Mon. – Thur., 4 p.m – 6 p.m., in addition to classes on Sunday.

When the Frierdiker Rebbe visited Chicago in 1942, Mr. Kosofsky and his class were privileged to meet the Rebbe at the Greymere Hotel. A sicha to the students of the Talmud Torah on Wed. evening, 11 Shvat, is printed in Bikur Chicago. Although not yet bar mitzvah, this meeting left a life-long impression on Mr. Kosofsky. Around that time, he joined a gemara class taught by Rabbi Sholom Posner, shortly before Rabbi Posner moved to Pittsburgh.

Mr. Kosofsky studied in the Lubavitch yeshiva that existed for two years in Chicago in the 1940s under the direction of Rabbi Yosef Weinberg. Afterwards, he continued his studies at Yeshivas Beis Medresh LaTorah (Skokie Yeshiva) for many years.

He earned his living as a CPA and as a comptroller for a company that refined precious metals. He and his wife, Reitza tichyeh, dedicated their lives to the ideals of the Rebbe and raised a chasidisher family. At a time that many people moved away from Yiddishkeit, they only used cholov Yisrael, and sent their children away to Yeshiva for high school.

In the 60s and 70s, under the direction of Rabbi Tzvi Hirsch Meisels, Mr. Kosofsky arranged to bring Cholov Yisrael to Chicago. This involved sending a mashgiach to a farm and dairy in Wisconsin and trucking the milk into Chicago. At that time, only a handful of families were careful to drink only Cholov Yisrael. There were many challenges, but he received encouragement from the Rebbe and did not give up. Eventually, it took hold and continued successfully for many years, until others stepped in to take over.

When hook-ups of the Rebbe’s farbrengens began, he immediately organized the hook-up in Chicago in his home. Chicago was one of the first cities to sign up with WLCC. Broadcasting a phone call was not as simple in those days. He experimented with different ways to attach wires from the old-fashioned phone box to a reel-to-reel tape recorder borrowed from Mr. Yankel Katz. Most of the Rebbe’s farbrengens were broadcast in his house, which many chasidim attended.

Mr. Kosofsky had a close relationship with shluchim to Chicago, Rabbi Shlomo Zalman Hecht and Rabbi Hershel Shusterman. When Rabbi Daniel Moscowitz arrived on shlichus, he gave him much support and encouragement. As other shluchim arrived, they would often consult with him on matters pertaining to their shlichus. He and his wife also worked closely with Rabbi Yitzchok Wolf, Rabbi Aron Wolf, Rabbi Baruch Hertz, Rabbi Shmuel Notik, Rabbi Naftali Hershkowitz, Mrs. Tzirel Turen, and Mrs. Baila Grinker. Many shluchim came to him for help to file their taxes. He organized the annual Seudas Hoda’ah for Rosh Chodesh Kislev for many years and received a plaque from Lubavitch Chabad of Illinois in recognition.

During his first yechidus in Tammuz 5715, the Rebbe encouraged him to learn Tanya. He started learning with Rabbi Dovid Moshe Lieberman, who lived in Chicago at that time. Over the years, Mr. Kosofsky studied with Rabbi Yehoshua Goodman ob”m and yibadel lechaim tovim Chazan Willhelm Silber.

Numerous rabbis who came to Chicago to raise funds, and bachurim who came on Merkoz shlichus, knew they could find a place to stay at 3126 W. Hood during their visit to Chicago. These included Rabbi Avraham Drizin (Mahyohr), Rabbi and Mrs. Goldstein of the Diaspora Yeshiva, Rabbi Hershel Morozov, Rabbi Levi Goldstein, as well as Russian-speaking bachurim who came to help with FREE, and many, many others. Many of those bachurim are shluchim to the Russian-speaking community today.

As the community of Anash in Chicago grew with young families of baalei teshuva, many of them turned to Mr. Kosofsky and his wife for guidance and advice. They earned the respect of the community for their integrity, down-to-earth attitude, and sense of humor.

In 2014, he and his wife moved in with their daughter and son-in-law, shluchim to Simcha Monica, CA. He continued to attend minyan twice a day and studied Daf Yomi on his ipad.

Mr. and Mrs. Kosofsky were privileged to raise a large family of children, grandchildren, and great-grandchildren who are Chasidisher yungaleit, many of whom are on shlichus in cities around the world.

To submit memories and stories of the niftar, please email them to nichumyitzchokkosofsky@gmail.com.

For those that call Mrs. Reitza Kosofsky: Please check with the family that she has been informed before speaking to her.

P.S. In the letter from the Rebbe dated 16 Shvat, 6722 that is attached, the Rebbe states that he was pleased to hear about Mr. Kosofsky’s success with cholov Yisrael. In the postscript, the Rebbe responds to his question about when to make an upsherenish for his son, whose birthday is erev pesach. The Rebbe advises him to cut the boy’s hair on the birthday, either the night before or by day, and not to push it off.
P.P.S. In the attached video file, Mr. Kosofsky speaks about learning at Hebrew Theological College, in honor of their 100th anniversary.