« Hasidic Jews Attacked By 7 Thugs On Shabbos, Shtreimels Thrown To The Ground
Israel to Cut Power Supply to PA Over Unpaid Debts » 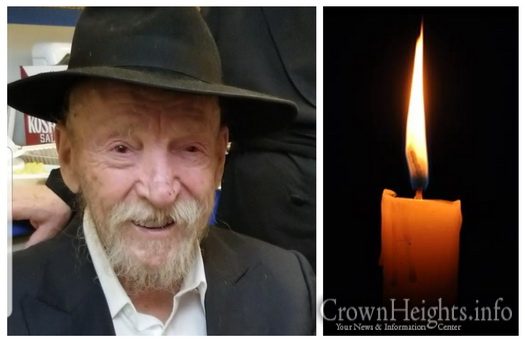 With great sadness we report the passing of R’ Zev Sirota, OBM, of Kiryat Malachi/Crown Heights. R’ Zev was the son of the Chosid R’ Mordechai Sirota of Tashkent. He passed away on Shabbos the 21st of Elul 5779.

R’ Zev was the son of the Chasid,  R’ Mordechai Sirota of Tashkent, who together with his wife, Rivkah, were known machnis orchim and helped save hundreds of lives during the war. As the eldest of 10, R’ Zev grew up in this home dedicated to helping others in any way physically possible. They also ran an underground matza bakery, providing matza to as many people as they could.

As a young boy, he learned in the underground Yeshiva Tomchei Temimim in Tashkent, studying under the known Chassidim, R’ Yisroel Neveler, R’ Moshe Korlevicher,  and R’ Yonah Kahn.
They would also fabreng in his home, together with other Chasidim of that generation that lived in Tashkent during the war.

R’ Zev later married his wife, Yehudis Olidort. They lived in Moscow, fighting daily to uphold a yiddishe and chassidishe lifestyle behind the Iron Curtain, and together they raised a generation of Chasiddishe children with true Mesiras Nefesh.

At the Rebbe’s direction, once they were able to emigrate to Israel in 1971, R’ Zev and his family settled in Nachlas Har Chabad. For the last period of his life, he lived in Crown Heights and learned daily in Kollel Tiferes Levi Yitzchok. In the last few years, even as his health deteriorated greatly, R’ Zev never missed davening every day with a minyan or going to the mikvah daily.

He could always be seen with a Tehillim in hand, and on most days, would finish Sefer Tehillim twice. R’ Zev also took it upon himself to fast on many special occasions. He had an exceptional, unparalleled, and above human kobolas ol.

He was predeceased by his brother, Reuven Sirota, as well as a younger brother and a younger sister who passed while still in Russia.

He was predeceased by his brother Reuven Sirota obm of Crown Heights.

« Hasidic Jews Attacked By 7 Thugs On Shabbos, Shtreimels Thrown To The Ground
Israel to Cut Power Supply to PA Over Unpaid Debts »