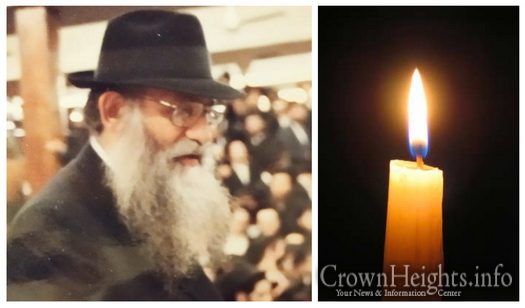 With great sadness we report the passing of Rabbi Sholom Dovber Halevi Popack OBM, a longtime Crown Heights resident and one of the first to attend Tomchei Temimim in 770. He passed away on Shabbos, the 27th of Iyar, 5779.

Sholom Ber was born on the 21st of Adar, 5688 in Barre, Vermont, known as the world’s largest granite quarry. His father, Rabbi Avrohom Popack obm served as a Rabbi there, as well as the shochet and mohel, at the instruction of the Frierdiker Rebbe.

Rabbi Sholom Dov Ber was one of the first students of Yeshiva Tomchei Temimim 770. He was so diligent in his learning and meticulous with keeping the Seder in Yeshiva, that the Frierdiker Rebbe once commented about him, “for such a Tomim it was worth all the hard work.”

In Adar 1951, he married his wife, Chaya Sarah (nee Rimler) and they merited to have the Rebbe be mesader kiddushin at their Chuppah.

After their marriage, he served as the Rov of the Kehillah and shochet in McKeesport, Pennsylvania.

He later moved on Shlichus to Pittsburgh, PA, where he was involved in Chinuch.

In the 1960’s he moved to Crown Heights, where he was the owner of a stationery and toy shop on the corner of Union Street.

His entire life, he was known for his great Yiras Shomayim, and his dedication to learning Torah and Avodas Hashem.

He is also survived by his brother, Rabbi Yitzchok Noach Popack of Miami, FL.