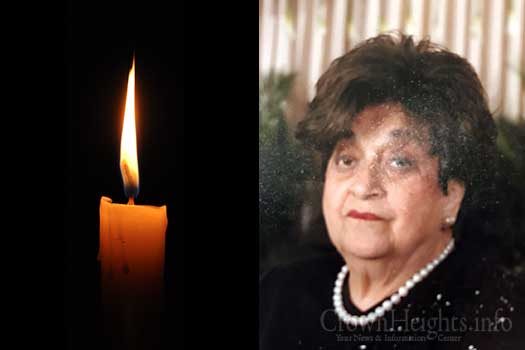 With sadness we inform you of the passing of Mrs. Sarah Raizel (Rosalind) Gordon OBM, wife of the late Rabbi Nison Gordon OBM, longtime residents of Crown Heights. She was 95 years old.

She was the wife of late Rabbi Nissin Gordon OBM, eldest son of Rabbi Yochonon Gordon OBM – the former editor in chief of the Algemainer Journal – who Levaya was among the last attended by the Rebbe.

She was the daughter of R’ Aron and Chaya Malka Berger OBM.

The Levaya will take place today, Sunday, 3:00pm at Shomrei Hadas and on to the airport. Kevurah will be in Israel.

Shiva will be observed at 635 Montgomery Street after the Availim return form Israel on Tuesday morning. Shacharim 8:00am, Mincha and Maariv times to be announced.