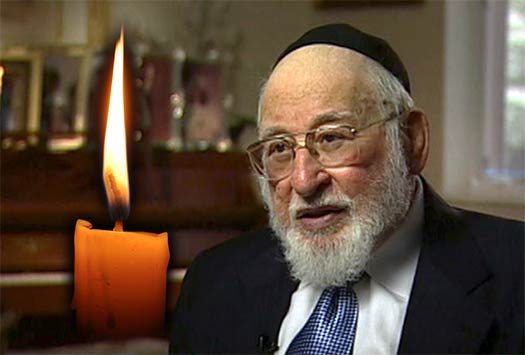 With sadness we inform you of the passing of Reb Ben Zion Shenker OBM, the famed composer and singer of many songs and Niggunim. He was 92 years old.

Reb Ben Zion was Niftar suddenly as he didn’t wake up on Sunday morning.

Reb Ben Zion composed more than a thousand songs, many of them which are sung by Yidden every Shabbos – such as Eishes Chayil (1953) and Mizmor Lidovid (1946). His “Yasis Alayich” (1965), is sung by every Jewish wedding in the world.

He released his last album just a few months ago.

Reb Ben Zion was born in Williamsburg, Brooklyn, in 1925 to his parents who were immigrants from a small town near Lublin.

Reb Ben Zion preserved the Modzitzer musical tradition for more than half a century. He Started in 1941 as the Imrei Shaul’s musical transciber/secretary. He served as the leading Baal Tefila in the Modzitzer Shteeble of New York for decades.

He knew well over 1,000 Modzitzer niggunim by heart – some take more than a half hour to sing (“Ezkara”).

His connection to Modzitz began when he was a teenager. The Modzitzer Rebbe moved to Brooklyn as the Holocaust consumed much of Chasidic Jewry in Eastern Europe. On a Shabbos afternoon in 1941, the Rebbe noticed R’ Shenker humming Chasidic melodies written out in a book.

“The rebbe turned around and asked me, ‘You know how to read notes?’ To which he responded ‘A little.’ After that, he became his musical secretary. Anything he composed, Reb Ben Zion used to notate.

R’ Shenker had not only studied music theory; he also sang in a boys’ choir and performed on his own radio show on a Yiddish station. A 13-year-old Shenker even made a record in 1938.

Reb Ben Zion Shenker grew up to get Semicha, and made his living in the garment and jewelry industries while composing Modzitzer nigunim.

The Levaya will be held on Sunday at 1:00PM at Shomrei Hadas Chapels on 39th Street and 14th Avenue in Boro Park.