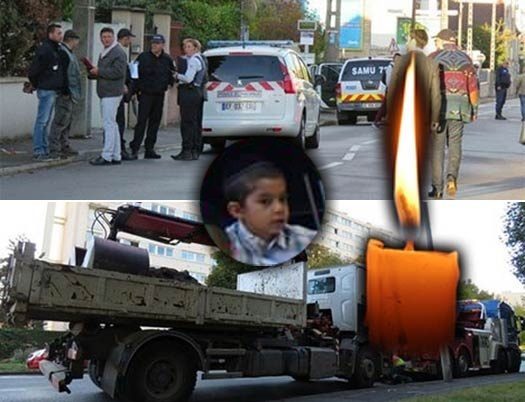 A terrible tragedy befell the Jewish community in the French city of Poissy when a mishap with a construction truck mortally injured 7-year-old Shmuel Sarfati, son of local Chabad Shluchim. Rescue services were forced to declare his death at the scene.

The incident occurred on Monday afternoon on a busy city street as he walked home from Yom Tov prayer services along with his father, the local Chabad Shliach and Rabbi of the city Rabbi Menachem Sarfati.

A construction truck that was driving at a slow rate of speed when, according to authorities, a panal of the truck fell open and stuck the child and mortally wounding him.

Moments after the crash rescue personal declared his death at the scene.

Sources are reporting that the Levaya is set to take place in Israel on Wedensday and that activists are working to try and ensure that proper Kavod Hames is given.

Israeli news site Shturem reported that this terrible accident occurred on the date of the Yohrtzeit of the victim’s great grandfather.

Shmuel is survived by his parents Rabbi Menachem and Rachel Sarfati as well as his siblings and grandparents.