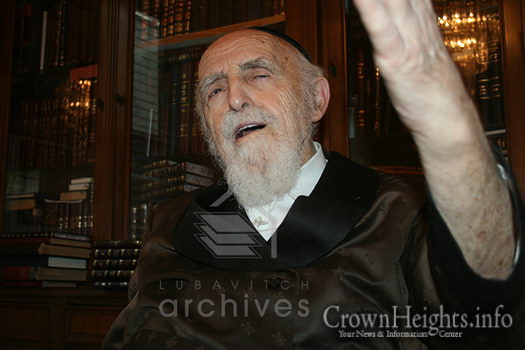 Reb Binyomin Wulliger, one of the elders of the Tzans community in Borough Park, passed away. For many years Reb Binyomin served as the liaison between the Rebbe and the later Klausenberg Rebbe, Rabbi Yekusiel Yehudah Halberstam.

A diamond dealer, Reb Binyomin, was a man of action. Throughout his life he was involved in many projects for the Jewish community.

From then on, he felt very close to Chabad and the Rebbe. In 2013 he sat down for a long interview with Lubavitch Archives. Two of those stories were later incorporated into the Advice for Life series, Learning on the Job: Jewish Career Lessons and Advice for Life: Daily Life.

When to Give Advice

Diamond dealer Binyomin Wulliger was active in Hasidic circles for many years, serving as a liaison between the Chabad and Sanz communities.

Once he visited the Rebbe after a prolonged absence. “There’s something I’ve wanted to speak to you about for a long time,” the Rebbe told him.

When Mr. Wulliger wondered why the Rebbe had not summoned him, the Rebbe explained: “If one wants to give money, it can be given anytime. But if one wants to give advice, regardless of how brilliant and apt it may be, if the person does not approach him or herself, one cannot offer the advice.”

The Rebbe proceeded to give his advice to Mr. Wulliger.

A Hospital is for Healing

During the Holocaust, Rabbi Yekusiel Yehudah Halberstam was wounded by a stray bullet. He didn’t want to go to the clinic in the Nazi concentration camp, for fear of his life. Instead, he plucked a leaf from a tree and covered his wound. Three days later his wound healed, and he made a resolution that if he survived the war, he would build a hospital.

His criterion for his dream institution was that “the doctors and nurses would believe that there is a G-d in this world. They would know that when they attend to the sickly, they are fulfilling one of the greatest commandments of Judaism.”

Rabbi Halberstam later became the leader of the Sanz-Klausenberg hasidic dynasty. He kept his word, and in 1976 he initiated the building of the medical center Laniado Home for the Sick. The hospital was named after the brothers Alphonse and Yaakov Avraham Laniado, who donated a vast sum to the cause.

Seeking a blessing and a letter of approbation for the new hospital, Rabbi Halberstam sent a delegation to the Rebbe. There Rabbi Binyomin Wulliger, a diamond dealer and a confidant of Rabbi Halberstam, described the endeavor to the Rebbe. The Rebbe responded, “What is needed is financial assistance. A letter from the Lubavitcher Rebbe will not pay the bills.”

The Rebbe then wrote a check with the accompanying instructions: “Make sure to cash the check. If you want to make a copy to show that I support the hospital, you may do so, as long as you make use of these funds.”

The hospital was also considering a nursing school, but Rabbi Halberstam was concerned it would attract students who would not adhere to the hospital’s religious ethos. The Rebbe responded, “You do not have to worry about who will attend. If the school creates the appropriate atmosphere, this will generate an attitude in the spirit you seek to craft.”

The hospital’s name was changed to “Sanz Center for Health: Laniado Hospital.”