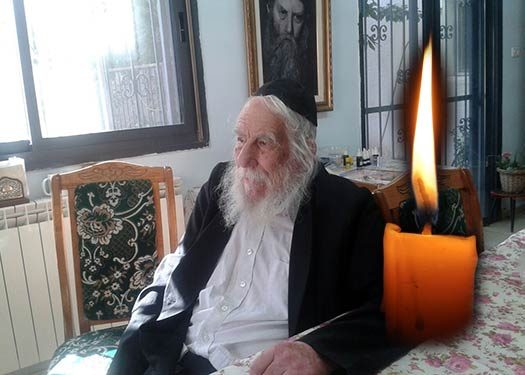 With sadness we inform you of the passing of Rabbi Dovid Goldstein OBM, a senior member of Anash in Tzfat and a former resident of Bnei Brak and Boro Park. He merited to attend a Yechidus with the Frierdiker Rebbe as well as his Levaya. He was 82 years old.

Born in Boro Park to R’ Moshe Yehuda and Chaya Malka Goldstein, a Chassidish but not Lubavitch family, where his father was known as ‘Der Shomer Shabbos’ since being among the few in the neighborhood at the time that kept Shabbos. He was the youngest of seven children.

His older brother, Uncle Yossi Goldstein OBM, grew closer to Lubavtich and eventually he followed in his footsteps as well.

In his youth Reb Dovid wanted to study Torah in Tomchei Temimim in Crown Heights, but due to the distance and various medical conditions his parants would not allow the change. In one of his letters to the Frierdiker Rebbe he expressed his strong desire to learn in Tomchei Temimim and his parents refusal, to which the Rebbe responded that his must listen to his parents and when his health will improve he can make the change.

Despite this challenge he would frequently visit 770, walking the long distance on Shabbosim and Yomim Toivim and attend farbrengens.

The Levaya will take place in Tzfat, Israel at 6:00pm.

R’ Yossi Goldstein will be sitting Shiva in his Crown Heights home, 723 Montgomery Street. Shachris at 7:30am, Minacha and Maariv Bizmana.