« Shabbos at the Besht: A Tale of Three Souls
Fewer Brutality Complaints Against 71st Precinct » 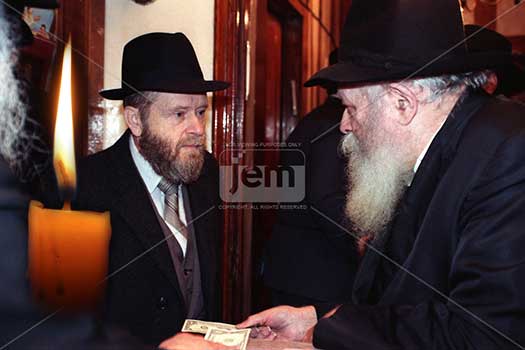 With sadness we inform you of the passing of Rabbi Yosef Waldman, OBM, a longtime resident of Crown Heights and a chossid whom the Rebbe credited with inspiring the continuation of the Rashi Sichos. He was 84 years old.

R’ Yossel was one of four brothers and a sister, born into a Galitzyaner family who lived in Williamsburg, Brooklyn. After celebrating his Bar Mitzvah, his father sent him to study in Lubavitcher Yeshiva – then in 770 – in the 1940s.

In 1958 he and his wife Miriam got married and settled in a home on Montgomery Street near Schenectady Avenue.

His friends and neighbors described him as a very organized and private individual, who had a great interest in learning and enjoyed tapes of the Rebbes Sichos.

Although not a Lubavitcher Chossid by origin, after getting married he began growing his beard and started wearing a kapoteh, a change the Rebbe noticed and commented on by saying “yashar koach.”

Disheartened, he penned a heartfelt letter pleading with the Rebbe to reconsider. “Not because I was a Chossid; I was simply farkoched [engrossed] in them,” he said in an interview. The Rebbe answered that he needed to speak with a number of people, which he did and wrote again to the Rebbe, and received the answer “hamaaseh hu haikar.” Thinking that this was the end, R’ Yossel was shocked that the following week the Rebbe once again gave over a Rashi Sicha. Even more shocking was the Rebbe’s introduction to that Sicha: “A Yungerman who is not even from the Shpitz Chabad claims that the biurim in Rashi are being Koched in, and moreover it is a Geshmake thing…”

In his trade as a jeweler, he developed an idea improving upon a common diamond polishing practice. In 1976 he was granted a patent on his idea, which is in use to this day.

He is survived by his wife, Miriam, and daughter, Chantzie Meth (New Jersey).

The Levaya will take place Sunday, leaving from Shomrei Hadas at 10:00am and passing by 770 at around 11:00am.

« Shabbos at the Besht: A Tale of Three Souls
Fewer Brutality Complaints Against 71st Precinct »