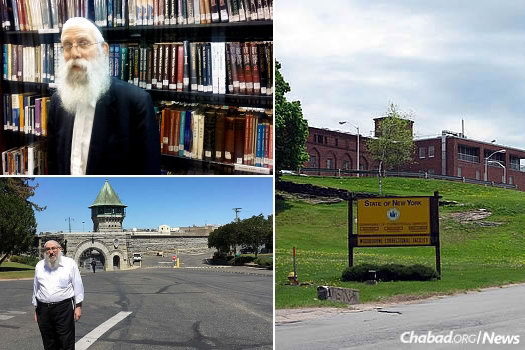 Soon after the Havdalah flames are doused on Saturday night, March 11, rabbis and rabbinical students will be starting their engines and embarking on a Purim adventure across the state of New York. They will observe Purim—a holiday that celebrates Jews’ miraculous salvation from the evil Haman more than 2,300 years ago—bringing cheer to their brethren behind the walls of more than 40 correctional facilities after Shabbat through late afternoon on Sunday.

As of Jan. 1, 2016, some 4,017 inmates (3,981 men and six women) in the state identify as Jews, according to the New York State Corrections and Community Supervision’s “Under Custody Report.” (These numbers are self-reported according to the inmates, and so fluctuate.)

Most of them, separated from their families and communities, and spread out across the state’s nearly 55,000 square miles, will get the chance to perform the four mitzvahs of Purim: listening to the Megillah, giving gifts of food, dispensing charity to the poor and enjoying a festive meal.

The team of volunteer rabbis is led by Rabbi Kasriel Kastel of Brooklyn, N.Y., who has served as program director of the LubavitchYouth Organization for 49 years. Among his many duties in that capacity is overseeing Jewish programming during Purim, Sukkot(Chol Hamoed) and Chanukah for the incarcerated.

His work initially began in 1967. On June 3, less a week before his wedding (and two days before the outbreak of the Six-Day War in Israel), Kastel’s phone rang at midnight. It was Rabbi Dovid Raskin, director of the Lubavitch Youth Organization, calling at the behest of the Rebbe—Rabbi Menachem M. Schneerson, of righteous memory—who wanted to know if Kastel, then in his early 20s, would be willing to help undertake a significant project, to get Jewish males and boys over the age of 13, from every walk of life, to start putting on tefillin, even just once.

It was the start of one of the Rebbe’s most integral campaigns: Mivtza Tefillin.

Kastel started shortly after the end of the war. He notes that he was only supposed to work on the campaign two hours a day—from 9 a.m. to 11 a.m., at which time he attended Kollel.

“My job was to organize,” explains the now 73-year-old. “To call area hospitals, nursing homes and other similar venues, and get volunteers to go every single Sunday and put on tefillin with everyone who wanted to.”

He continued working and learning until he was officially hired as program director of the Lubavitch Youth Organization in 1968. His job included welcoming and arranging accommodations and study programs for college students who would regularly pour into the Crown Heights neighborhood of Brooklyn to experience Shabbat and the Jewish holidays.

By the 1980s, he was developing and directing seminal Shabbaton pegishah (“encounter”) weekends, which would attract visitors from around the world, many of them experiencing traditional Jewish life, learning and practice for the first time. They also included a Shabbat farbrengen with the Lubavitcher Rebbe—Rabbi Menachem M. Schneerson, of righteous memory. Many weekend attendees would eventually become Torah-observant men and women, and the Shabbaton concept became a widely imitated model used by Jewish organizations worldwide.

But back in 1968, he says, there were virtually no Chabad Houses. “We were cute,” quips Kastel. “Synagogues and Jewish organizations wanted us to come talk about who we were, tell some stories and sing a song.”

Kastel’s job was to recruit people to run such programs. At first, he asked yeshivah boys and Kollel students to go because they had the time, but the Rebbe wanted the whole community to be involved. Eventually, Rabbi Kastel began looking for families to share their Yiddishkeit with the larger Jewish community.

The Tenenbaums were one such family to heed the call.

For many years, Rabbi Sholom Tenenbaum of Crown Heights would bring his children, dressed in their Purim costumes, to a senior center in nearby Flatbush. “I would read the Megillah, the kids would give out mishloach manot [gifts of food] and sing,” he says. “The seniors loved it. We did that every year together until the children grew up.”

With his children grown, Tenenbaum took up Kastel’s offer to transfer his Purim program to a new venue: prison.

An Exercise in Unity

In June 1985, the Rebbe gave a powerful talk drawing on the Torah to challenge the effectiveness and humaneness of prisons. It prompted Lubavitch activists around the world to work to ensure that incarcerated Jews and their families have their physical and spiritual needs met. It is also the basis for the work of the Chabad-affiliated Aleph Institute, founded four years earlier in Surfside, Fla., to provide financial, emotional and spiritual assistance to Jews serving in all branches of the U.S. military and to those in prisons throughout the United States, as well as their families.

Today, he coordinates programs with chaplains all over the state; filing vast amounts of paperwork 30 days in advance of visits; scheduling each program to exacting time standards; and finding volunteers who can drive, who are capable of reading the Megillah and who are willing to spend one of the most exuberant days of the year away from their communities.

Rabbi Tenenbaum, 67, became one of them.

“Sometimes, the volunteers drive eight hours to read the Megillah for one person,” says Kastel. Because Purim begins on Saturday night (Motzei Shabbat) this year, Kastel will dispatch three carloads of rabbis from New York City to spend Shabbat in Rochester, Buffalo and Syracuse, so that they can read the Megillah for inmates before the 9 p.m. visitors’ curfew that night.

Tenenbaum set out with Rabbi Yechezkel Posner last year before first light, stopping in the Yiddish-speaking village of Kiryas Joel, N.Y., to daven with Satmar Chassidim and still make it to the Woodbourne Correctional Facility by 9 a.m. “One of the guys there was very religious and wouldn’t eat anything before hearing the Megillah,” explains Tenenbaum, “so Rabbi Kastel arranged for us to get there as early as possible.”

He describes his first experience in the prison as bittersweet. “On one hand, you have Purim there with the prisoners, you fabreng with them and share stories of Purim,” says Tenenbaum. The group of 10 inmates waiting for them was diverse, he continues: “One guy had white in his beard; one guy looked to be under 25. Usually, in a shul, the congregants are from one area or social group; here, they are all together in one place. That’s some nice achdus [‘unity’]. It’s also nice to be with every type of Yid—no matter who he is—and help him to perform a mitzvah. They didn’t want us to leave!”

Still, the sweetness of the event was a bit tempered for him: “When you walk out, it’s very emotional because the gates close behind you, and they’re still there for however long. It shakes you up.”

Along those lines, Kastel reinforces the No. 1 rule for visitors: Never ask anyone why they’re behind bars.

“You just pray that everybody comes out of it on the positive side,” says Tenenbaum.

Tenenbaum and Posner made it to two more facilities before sunset, by which time Tenenbaum says his voice started to show signs of strain after three Megillah readings. He notes that he is excitedly preparing to set out again this Purim.

For volunteers who aren’t able to make it home before nightfall on Sunday, Kastel also arranges for them to share in a festive meal at a Chabad Housealong their route.

He has his hand here, there; he organizes so many schedules for so many people.

“I consider myself an enabler,” offers Kastel. “My job is not to do it, but to make it possible for other people who want to do it.” He laughs. “Usually, enabling has a negative connotation, but it can be positive, too.”