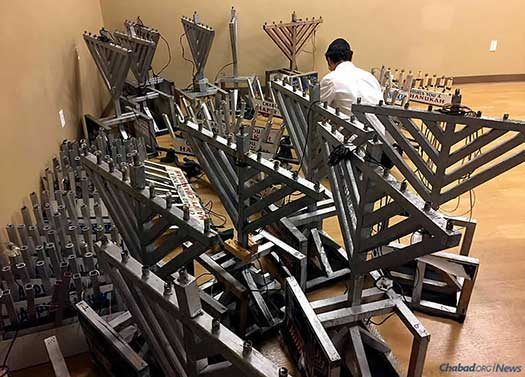 In the hallways of Lubavitch Yeshiva-Zekelman Campus in Oak Park, Mich., just miles from Detroit proper, the anticipation is palpable as the “Friday Boys”—named for their weekly journeys spreading Judaism around the metropolitan area—prepare to bring extra light and energy to the city throughout the eight days of Chanukah.

Some 1,500 menorah kits—containing a menorah, candles, a dreidel and instructions—are ready to be distributed by a cadre of 70 students. These yeshivah bochurim will spread out all over the city, going to strip malls, shopping centers, grocery stores, senior centers, businesses and private homes, including many in the Russian Jewish community, to light menorahs and celebrate Chanukah.

The yeshivah also coordinates a 75-car menorah parade through the streets of Detroit, a popular sight that has passers-by waving and cheering as drivers go by. The event, to take place on Dec. 26, is typically seen by thousands and almost always covered by local news outlets. In addition, 20 of the students will attend “Menorah in the D”—the community-wide, public menorah-lighting (complete with entertainment and holiday foods) that now takes place annually in the city’s business district. Thousands attend, often with young children in tow, where the bochurim hand out menorahs and candles to people who don’t have them.

Rabbi Ezra Wiemer, 22, who runs the yeshivah’s mivtzoim program, says: “We take the Rebbe’s words to heart—that every encounter with another Jew is an opportunity to spread our love for Torah and mitzvahs, and to care about and help a fellow Jew, both physically and spiritually. During Chanukah, we take that passion, energy and enthusiasm, and share our knowledge with a jelly doughnut and chocolate gelt in one hand, and a menorah kit in the other.”

The Lubavitcher Rebbe—Rabbi Menachem M. Schneerson, of righteous memory—initiated a 10-point campaign in the late 1960s and early 1970s to connect Jews, who perform the mitzvahs, to G‑d, who has commanded them.

Though the yeshivah has always embraced the Chanukah distribution, this year’s program has expanded tremendously. Bochurim are not only going out into the community on Fridays, but their relationships have developed into such strong bonds that several of the boys learn during the week with people on their regular routes, and take time out of their busy schedules to put on tefillin daily with people who live nearby.

Yossi Spalter, 16, says that the Friday mivtzoim (campaigns or endeavors) are the highlight of his week. “I’ve been at this yeshivah for three years,” he notes. “And this is the best year yet. There is an emphasis on a specific mitzvah each week. This gives us the opportunity to share so much more knowledge with the people on our routes. Several of us have regulars who test us on the ‘Parshah in a Nutshell’, challenging us with questions. It’s fun and something for all of us to look forward to.”

Other changes in the program have pleased the teen as well: “We’re extremely well-prepared, and every detail is taken care of—from being given a weekly brochure outlining the ‘Mitzvah of the Week’ to providing three buses that take us directly to our routes. This allows us to spend our travel time sharing ideas, discussing ways we can make a difference and offering each other encouragement. We watch videos of the Rebbe and are deeply inspired.”

Rabbi Shmaya Shmotkin, a member of the yeshivah’s leadership team, says such motivation and dedication goes even further. The students decided among themselves to surprise Wiemer by aiming to raise the $8,000 needed to fund the Chanukah campaign.

“To see these boys work behind the scenes—to want so much to make a difference and to have a positive impact—is so energizing,” says Shmotkin. “It’s our mission to raise the standard for our bochurim, to prepare them to be the next generation of the Rebbe’s shluchim not only through the pursuit of diligent Torah study, but to share this light, this wisdom, with every single Jew.”

Their fiscal pledge, he continues, represents “one more beautiful moment for the boys to show their love of Yiddishkeit, their compassion and their enthusiasm as emissaries of the Rebbe.”