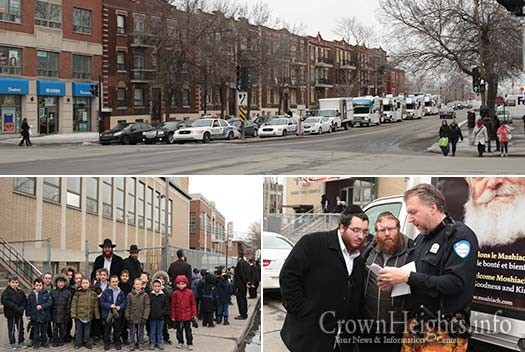 Four Mitzvah Tanks paraded through the streets of Montreal this past Thursday, in honor of Yud Alef Nissan, marking the Rebbe’s 113th birthday.

The first parade to take place this year celebrating the occasion, it was organized by Mitzvah Tanks Montreal which is led by Rabbi Mendy Wilansky with the help of Hatomim Yisroel Cohen and Hatomim Avraham Menachem Freundlich.

Members of the Jewish community in Montreal helped sponsor it, in an effort to inspire as many Jews as possible to do a Mitzvah and attend a Pesach seder.

The ‘tanks’ were ‘armed’ with tens of Bochurim who – with Matzos, Tefillin, and Shabbos candles – set out upon the city and gave them out to hundreds of unaffiliated Jews.

Saluting the parade, aside from all the people who stared in wonder, were the children from Tomchei Temimim, and Beis Rivkah who came out to salute the parade and the Tankistim.

A thank you is given to the Tankistim Rabbi Yitzchok Lebovics, Rabbi Mendel Zilberstein, Rabbi Chaim Zirkind, Rabbi Leibele Rodal, and Mr. Gedalia Perlman, and a very special thank you to Chabad activist Rabbi Dovid Cohen who helped and worked on getting the necessary permits from the city and the Montreal Police Department.