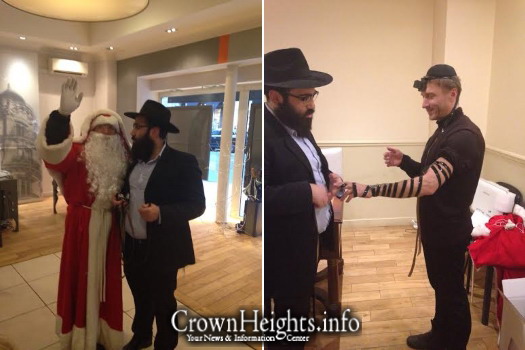 On the last day of Chanukah, Menachem Ladayov – founder of the French language Chabad news website Anachinfos.net – was out in Paris spreading the Chanukah spirit, when he happened to meet a man in a Santa Claus costume who was spreading the spirit of a very different holiday.

Menachem asked the man if he was Jewish, and the man replied – in a heavy Russian ascent – that his mother’s mother was Jewish.

Menachem excitedly explained to the man that according to Jewish law he is 100% Jewish, and asked the man if he would like to put on Tefilin.

The man readily agreed. He removed his Santa costume, wrapped Tefilin and said ‘Shema Yisroel’ for the first time in his life.

The entire moving experience was caught on video, which can be viewed below: