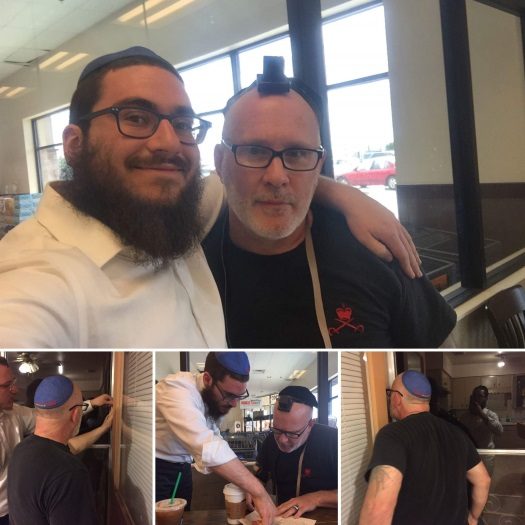 While traveling on Merkos Shlichus in rural New Mexico, Bochurim Duni Blotner and Zalmy Goldberg stopped for a routine cup of coffee at Starbucks. Outside the shop, they met someone who – unbeknownst to them – was experiencing ‘the darkest day of his life.’

One crazy story happened to me today in middle a hick town of Almagordo, New Mexico. My Friend (Duni Blotner) and I were heading to an address of a potential Jewish home, and on our way we decided that a long day like today will only go well with a freshly brewed coffee.

While walking out of Starbucks we saw a man mounted on his Harley; we approached him and asked him if he was Jewish, and in fact he was. So we sat down for coffee and we started to talk about his Jewish background.

Growing up on the Lower East Side of Manhattan with a Jewish mother and a catholic father (some 50 years ago), he seldomly celebrated the traditional Jewish holidays and that was about it. In course of our meeting he gladly put on Tefflin. As we ended our discussion, we made up to meet at his home and check the Mezuzas. (The rest of the day was uneventful and we felt quite unsuccessful.)

Finally in the evening we came to his home to check the mezuzas – or should I say mezuza cases – which were empty!

We put new, kosher Mezuzas in their place. As we put up the last mezuza, he turned to us and told us -quite emotionally – that he woke up this morning and for him the skies were dark. His wife having recently been diagnosed with a terrible illness, and him struggling with a difficult illness as well. Even he as a strong man, a master in Krav Maga and a security contractor, he felt weak, depressed and hopeless. He told us that this was his darkest day in his life.

Now, when we approached him, put on Tefflin , and put up the mezuzas, he felt that we were a divine beacon of light and hope in his dark life. With a shy smile he thanked us for lighting up his day and for reconnecting him to his true self as a yid. He asked to keep in touch, for this meeting had been so special.

With one cup of coffee we can change a Jew’s life :)