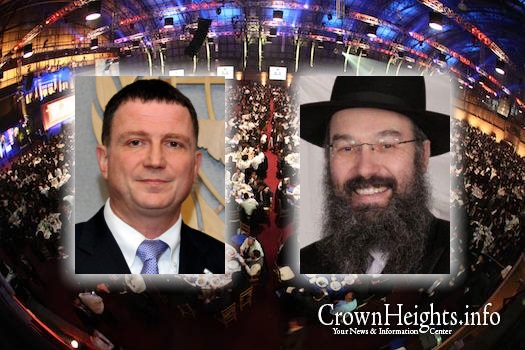 With mere weeks remaining until the start of the International Kinnus Hashluchim, 5775, CrownHeights.info has learned the identities of those who will be delivering the Keynote and Guest Speaker addresses at the grand banquet this year – the highlight of the four-day event.

The Keynote Address will be delivered this year by Rabbi Nissan Dovid Dubov, well-known author and lecturer and director of Chabad-Lubavitch of Wimbledon, in West London, UK.

Rabbi Dubov has authored 11 books on topics of Judaism and Chassidus, and is a contributing writer for the popular JLI courses, as well as a much sought after lecturer for Jewish institutions all over the world.

In a surprise announcement from Merkos, the Guest Speaker at this year’s Kinus will be the Chairman of the Israeli Knesset, Mr. Yuli Edelstein, who will be the highest ranking member of the Israeli government to ever address the Kinus.

Mr. Edelstein will share with the thousands of banquet attendees his personal memories of the self-sacrifice exhibited by Lubavitcher Chasidim behind the Iron Curtain, as well as his personal journey back to Torah Judaism with the assistance of the Rebbe’s Shluchim.

The two speakers will follow the address of Rabbi Chaim Yehuda Krinsky, Chairman of Merkos L’inyonei Chinuch, who will deliver insights from the talks and instructions of the Rebbe regarding the Avodah of Shlichus.