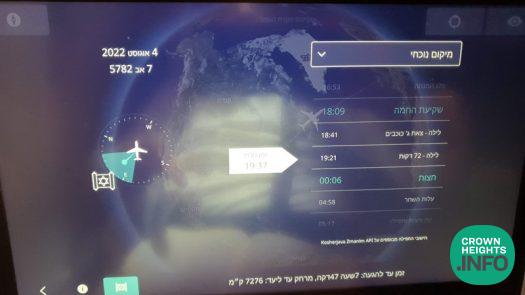 Judaism has specific rules for times and directions for the morning, afternoon, and evening prayers. And like everything in Judaism, there are endless opinions about when those times are. I spent much of the time before the Antarctica cruise studying these rules with experts and preparing for the mind-boggling implications of when to pray and even when Shabbos would fall out based on where we might be cruising at the time.

In-flight prayer times, or zmanim, are a major conundrum as you never know where you will be at what time. Chai Tables offers in-flight prayer times based on flights taking the Great Circle routing, but planes often don’t take the most direct routing. That’s especially true for flights since Russia closed off their airspace.

A few months ago I spoke to my son’s class about those implications and how it would affect Sefiras Ha’omer and Shavuos based on the path of the flight. That came after this fascinating DDF thread on the topic and comparing Chai Tables with MyZmanim.

DDF member yandmk sent me some pictures of zmanim, including prayer times and direction, from the entertainment system on El Al’s 787s. How awesome is this?!?

The system is offered in both English and Hebrew:

You can also change from current location to other cities:

I am curious to see if they’re using the Great Circle to find the direction to Jerusalem, as was preferred by the Alter Rebbe, or the direct compass route. It would be great if there was a way to toggle between both opinions!

Either way, this solves a huge pain point for in-flight prayer times and directions.

It’s something that Arabic airlines also offer, except they pray 5 times a day and towards Mecca.

I reached out to El Al for comment, and they said that the system is still in beta testing, which is why they haven’t made an official announcement about this feature. They said that they are still working out some minor tweaks, but they are thrilled to offer this service and that there will be other new additions coming to keep an eye out for.

They also said that for now it will just be loaded on their 787s, but based on customer feedback, that may be expanded fleet-wide.

Kudos to El Al for adding this helpful feature!

What other features would you like to see El Al add to their entertainment system?