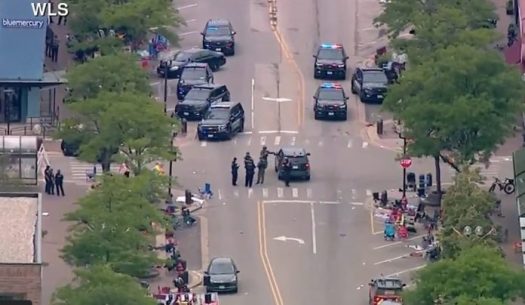 As the death toll from the Highland Park Shooting rises to seven, four of the victims have been identified as being Jewish, including a couple who leave behind their two-year-old child.

Little Aiden was found by rescue workers wandering around the massacre site in Highland Park just minutes after the incident. After police reached out on Social Media, they discovered the reason why.

Keven and Irena McCarthy, Aiden’s parents, had both been shot and killed in the shooting, with Aiden’s father Keven shielding his son with his body and saving his life.

As previously reported on CrownHeights.info, Rabbi Yosef Schanowitz, who runs the Chabad House just blocks away from where the shooting occurred, claimed that the shooter had entered his Chabad House just months before on Pesach.

“During last Pesach, that person entered the Chabad House. We have an armed security guard sitting in front… I approached him and sternly asked him to leave as I noticed he was not a member of our community,” Rabbi Schanowitz was reported as having told Israel’s Channel 2.

Robert E. Crimo III, 22, who is suspected as being the person behind the July 4th attack in the Chicago suburb, can be distinctly identified by his multiple body and face tattoos.

When the shooting began, four Yeshiva students just one block away were putting on Tefillin with many Jewish local residents. Once shots were fires, they took shelter in the Chabad House with many other community members.