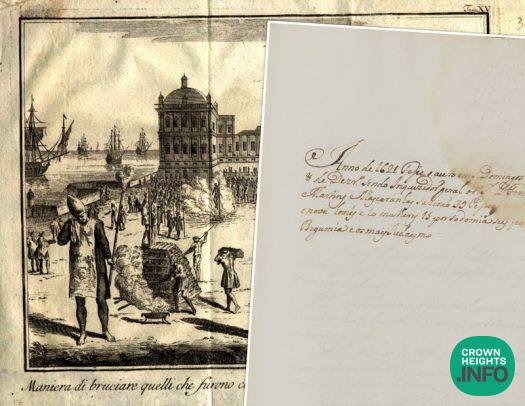 Nearly 500 years after the Portuguese Inquisition began, rare documentation of its proceedings and victims has been discovered in the Central Archives for the History of the Jewish People at Jerusalem’s National Library of Israel, and digitized for the first time. The 60-page manuscript, penned in the 18th century, documents the first 130 years of the Portuguese Inquisition tribunal’s activities, mainly in Lisbon. It includes detailed information about trials conducted by inquisitors against newly converted Christians accused of continuing to secretly practice Judaism.

The document, written in Portuguese, is known as “Memoria de todos os autos da fé que setem feito em Lisboa” (“An Accounting of All the Autos-da-Fé that Took Place in Lisbon”), and it includes information about autos-da-fé, public spectacles in which the sentences of Inquisition victims were read and executed by the authorities. Most of the information pertains to such ceremonies in Lisbon between the years 1540–1669, with brief mention of trials in Tomar. The number of victims at each autos-da-fé, the trial dates and locations, as well as the names of the priests who delivered sermons appear in the document.

The manuscript also contains the number of people burned at the stake. Among those prosecuted were “New Christians” accused of “Judaizing,” yet not all of the defendants mentioned in the document were Jews. “Old Christians”’ (defendants who came from families without any Jewish background) were also convicted of sodomy, bigamy, possession of forbidden books, and sacrilege.

In 1536, the Catholic Church initiated the Inquisition in Portugal following a mass influx into the country of anusim (Jews who had been forced to convert to Christianity) fleeing the Spanish Inquisition. The Portuguese Inquisition included particularly cruel punishments often carried out before large crowds that gathered to watch autos-da-fé. Trials ceased after about 250 years, although Portugal’s Inquisition was not officially abolished until 1821.

Over the centuries, most of the Jews who converted to Christianity in Portugal abandoned any sign of their Jewish roots, yet some continued to keep some form of Jewish observance in private. For example, some would secretly celebrate Yom Kippur and Passover belatedly in order to confuse the authorities, or light Sabbath candles inside pottery vessels to conceal the flames. Children under the age of 12 were not permitted to attend these clandestine religious ceremonies in order to keep them from revealing secrets that might betray their families.

According to Dr. Yochai Ben-Ghedalia, Director of the Central Archives for the History of the Jewish People at the National Library of Israel, “These discoveries shed light on the realities of a complex chapter in Jewish history, as well as on the Inquisition’s obsession with revealing any form of deviance, including traces of Jewish tradition. We hope the newly discovered document will help scholars better investigate this fascinating and difficult period of history.”