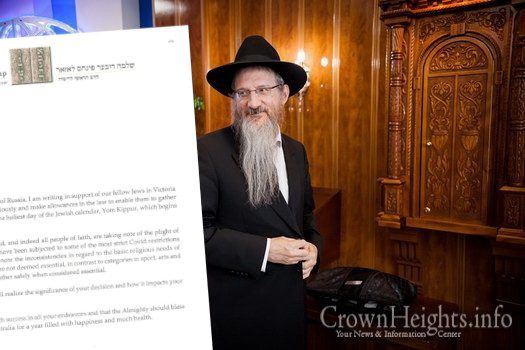 Chief Rabbi of Russia, Rabbi Berel Lazar, has published a letter to Australian authorities requesting that they take seriously a request by Jews in Victoria to reconsider restrictions on religious gatherings as Yom Kippur approaches.

“On behalf of over a million Jews of Russia, I am writing in support of our fellow Jews in Victoria to urgently take their request seriously and make allowances in the law to enable them to gather safely for communal prayer on the holiest day of the Jewish calendar, Yom Kippur, which begins at sunset this Wednesday,” the letter states.

The letter, dated September 12th and addressed to the Honorable Danial Andrews, Premier of Victoria, notes the exceptionally harsh COVID restrictions placed on Australian Jews, considered some of the strictest in the world.

The letter also points out the inconsistencies in the laws, writing “and in particular note the inconsistencies in regards to the basic religious needs of Orthodox Jews and how they are not deemed essential.” Lazar compares the laws regarding religious observance vs those of business, sports, and art, which he writes are “who are allowed to gather safely when considered essential.”

The strong push to have the restrictions changed come as Melbourne completes its sixth COVID lockdown.

Melbourne’s Jewish community also made headlines Rosh Hashana when police surrounded a shul where approximately 100 people had come to daven, handing out thousands of dollars in fines to each participant. 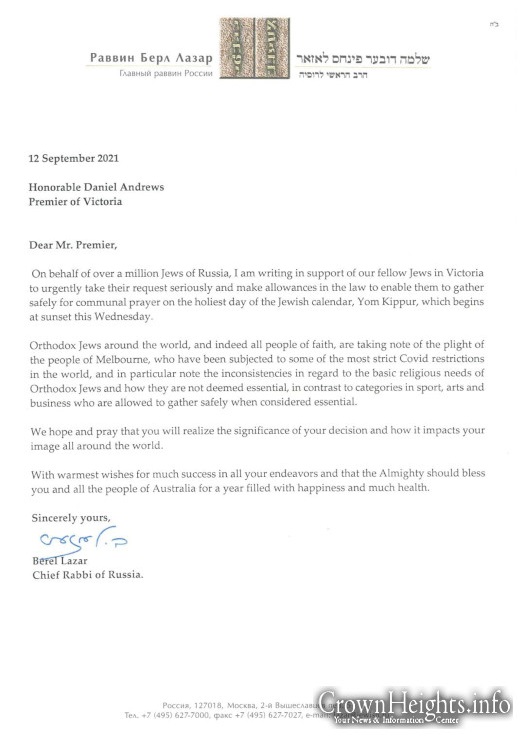