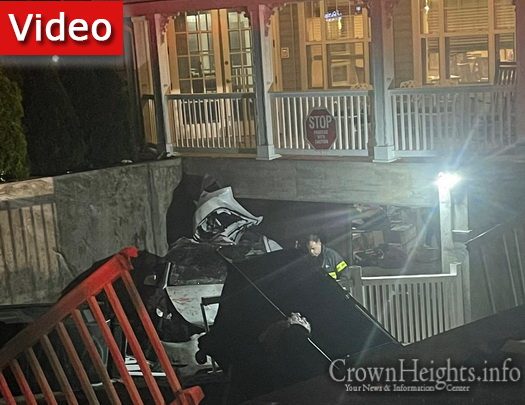 18-year-old Jack Levy, of Mill Basin was killed Thursday evening when the Tesla he was driving in crashed into an building on Strickland Avenue in Mill Basin.

According to the police, the 2021 Tesla sedan, was speeding northbound on National Drive in Mill Basin, when the driver lost control while turning eastbound onto Strickland Avenue. The car then crashed through a metal fence and striking two garbage dumpsters before rotating and striking a retaining wall. The car came to a rest within the driveway area of 5905 Strickland Avenue, an assisted living facility.

Canarsie Hatzalah responded to the scene, transporting Levy to the hospital, where he was pronounced dead.

Jack Levy had ben a rear passenger in the vehicle with four others, all of whom had only minor injuries.

According to YeshivaWorldNews, Levy had graduated High School at Yeshiva of Flatbush just hours before the crash.

Throughout the night, Chessed Shel Emes was on scene ensuring Kovod Hames.