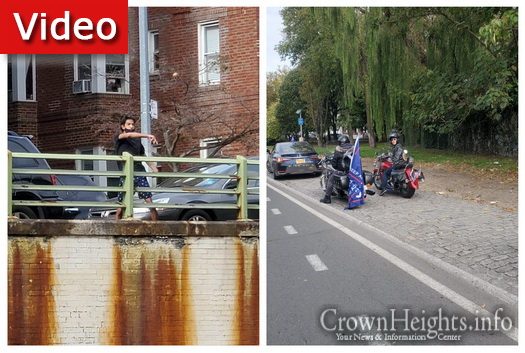 With flags flying and horns honking, a massive parade of Jewish vehicles paraded through the streets of New York City Sunday, standing tall and showing their Trump pride.

The vehicles began by lining the streets around Ocean Parkway in the area of Marine Park, before driving together to Ocean Parkway and onto the Prospect.

Vehicles of all types and Jews of all stripes made their Trump support known, but it did not come without resistance.

One video shows a man throw what appears to be eggs as the parade made its way onto the prospect. According to one parade participant, his vehicle was narrowly missed in the attack.

In another incident, a woman was arrested after she pepper-sprayed a Jewish man participating in the parade, while a third was caught on camera ripping a flag off a parade vehicle.

Another incident in Manhattan took place after a single-vehicle being driven by obvious Trump supporters was targeted, with red paint being splashed on the car, and the occupants physically assaulted. In the video of the incident, it appears that at least one person was arrested.

Overall, though, the parade was met with honking and cheers, showing large support for a Republican President in a predominantly Democratic city.

Other pro-Trump parades took place in concert with the New York City one, including one in Rockland County, NY.