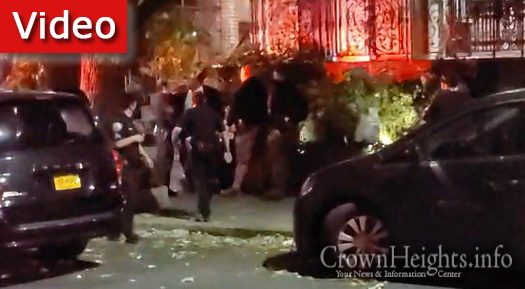 Despite telling elected officials that they would be arresting Heshy Tischler at 10:00am Monday morning, the NYPD warrant squad showed up to Tischler’s home Motzei Yom Tov and arrested him on charges of inciting a riot.

“The New York City Police Department Warrant Squad has taken Harold “Heshy” Tischler into custody,” the NYPD Twitter. “He will be charged with inciting to riot and unlawful imprisonment in connection with an assault of a journalist that took place on October 7, 2020 in Brooklyn.”

“What riot?!” wrote Rabbi Mendy Hershkop on twitter. “There were no business looted! No cars vandalized! Nothing thrown at police officers! This is not a riot! Besides a little fire lit by some teenagers this was as peaceful as a protest can be! This is a political arrest of an outspoken critic of the Mayor #Shame.”

The arrest is being termed by people on all sides of the political spectrum as a blatant and disgusting double standard, with the memory of the recent Black Lives Matter protests fresh in the community’s memory.

The community responded immediately with a series of small protests on street corners and in front of the 66th precinct.

In response, the NYPD attempted to remind the community of the charges on Mr. Tischler, tweeting that “Harold “Heshy” Tischler has been charged with inciting to riot and unlawful imprisonment in connection with an assault of a journalist.

While the charges appear serious, publicly available video shows the reporter, Jacob Kornbluh, walking away from the “assault” unharmed and under police escort.

The arrest also triggered the ire of Mr. Geoffry Davis, who was instrumental in arranging that Mr. Tischler turn himself in Monday morning. He tweeted “Very disappointed in @nypdnews. There was a clear understanding that Mr Tischler was going to turn himself in tomorrow morning with me escorting him in. Arresting him tonight was low and unhelpful.”

As the night progresses, additional protests are expected to take place throughout Boro Park.