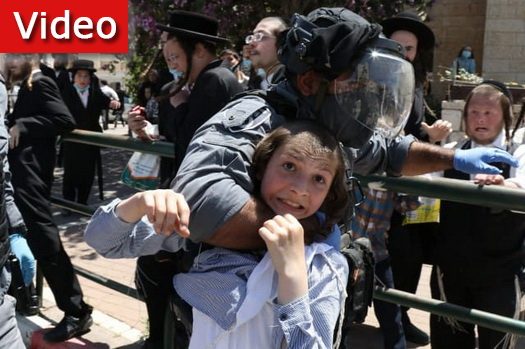 Videos circling on social media Wednesday show as police forcibly arrest an ultra orthodox woman holding children’s toys, her crime, improperly wearing a mask. The video shows as two female police officers take the woman to the ground, before cuffing her as she struggled.

The police released a statement that “During police enforcement activities in Jerusalem, they identified a woman who got off the light rail while not wearing a mask on her face as required. When she noticed the police, she tried to evade them and when they detained her for identification, she refused to identify herself while trying to walk away on the railroad tracks. Therefore she was first detained by the policewomen, and despite repeated warnings to cooperate and not to interfere with enforcement, they were forced to arrest her after she refused to be detained and eventually handcuffed her for resisting arrest.”

While that incident had a valid reason, another incident sparked a small riot in the streets after a group of officers detained a 12-year-old girl after she allegedly lowered her mask to take a drink.

Video of the incident showed the encounter, sparking widespread condemnation. Other videos of large non socially distant and unmasked groups in showed the story of targeted enforcement, largely targeting Charedim.

Another alarming incident showed as police in riot gear forcibly arrested children, pulling them away from adults during protests against the polices handling of social distancing and mask enforcement.

It must be noted that many of the new hotspots of the COVID-19 pandemic in Israel center around Charedi neighborhoods, including the Jerusalem area of Beitar Illit, which has since been placed on lockdown.