« 8:00pm: How Can We Resolve a Rift in Our Community and Synagogue About Social Distancing?
Berel Zucker to Lead Niggunim During Gimmel Tammuz Broadcast » 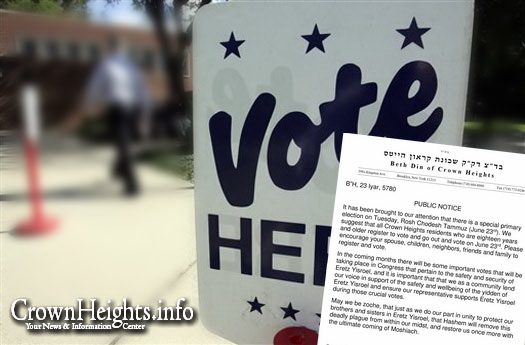 A city spiraling out of control, a government with double standards and hypocrisy, terrible antisemitic violence a while back, bail reform that allows criminals to walk scot-free… These are just some of the recent occurrences in New York that have many condemning our political leadership. But complaining won’t accomplish anything, only action will!

This year’s events have illustrated to us now more than ever why it is critically important that we all vote in every election, and how not doing so affects us all. Therefore, if you care about the safety and interests of our community and live in New York’s 9th Congressional District, you will vote in the June 23 Democratic Congressional primary for Chaim Deutsch. Chaim has a long history of caring for our community and standing up for our needs. In addition, those who live in Assembly District 43 should make sure to vote for Jesse Hamilton for the state assembly, as he would be much better than the incumbent Diana Richardson.

If we want Hashem to help us, we must do our השתדלות. Our חכמים tell us “אין סומכין על הנס“. This is why we make efforts to earn a livelihood, engage in safety precautions like wearing seatbelts and helmets, and take medicine when necessary. Voting is no different.

Moreover, voting is a privilege! It’s our chance to shape the government and the laws that affect our day-to-day lives. Those who squander this opportunity should not complain about what happens in our state, instead they should blame themselves for not trying to change it.

As the voters in New York are overwhelmingly Democrats, the only way for us to elect moderate politicians is to vote in local Democratic primaries, since whoever wins those will almost certainly succeed in the November general election. So even if you identify as a Republican or Conservative you must be practical and make down-to-earth decisions about what will accomplish the most good, even if that requires you to hold your nose, register as a Democrat and vote in their primaries. In real life, we must choose the best option that’s available, and not engage in false piety that makes us feel good about ourselves if that will lead to no good. Participating in the NY Democratic primaries does not “taint” you with that party’s label or ideology, nor does it mean you agree with them, it’s just a tactical way (and the only way) to ensure that less radical politicians get into office. Unfortunately we don’t live in an ideal universe where you can always get the “perfect” result you want.

One more point to ponder, who you vote for remains confidential, but the fact that you voted gets recorded when you sign your name before being given a ballot. As a result, elected officials know exactly how many people vote in each community by checking the records. Since our numbers are low, it’s obvious why they’re not interested in addressing our concerns and furthering our interests, as they’re not afraid to lose our support. The only way to change this is to start voting in big numbers from now on.

Remember, the politicians in this city and state are getting more radical, and there’s only one way for us to stop that. Vote now, or regret the consequences of not doing so later!

« 8:00pm: How Can We Resolve a Rift in Our Community and Synagogue About Social Distancing?
Berel Zucker to Lead Niggunim During Gimmel Tammuz Broadcast »