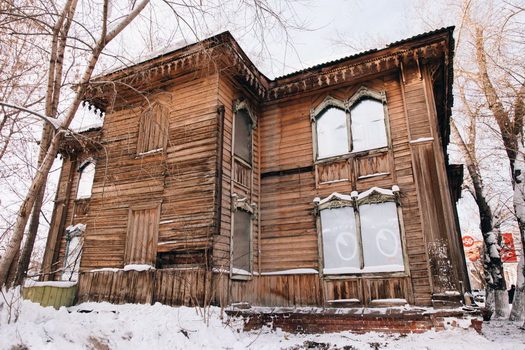 According to a report by Interfax Siberia, the Russian Federal agency responsible for the maintenance and restoration of sites of historical value has announced plans to hold a design competition, aimed at the restoration of a historical synagogue in the Siberian city of Tomsk.

The story of this Jewish house of worship, deep in the heart of Siberia, is closely associated with the fascinating historical figure of Herzel Yankel Tsam — a career soldier in the Imperial Army and one of only a handful of Jews (estimated at about nine) to attain an officer’s rank in 19th century Russia. After retiring from active duty with the rank of Captain, Tsam was an active participant in the affairs of the local Jewish community, as well as its benefactor. It is held by the local community that it was the personal initiative and financial generosity of Cpt. Tsam, that made possible the purchase of the property on which the synagogue was erected at the end of the 19th century. Local history also suggests that recruits of the 8th Tomsk Infantry Regiment actively participated in the construction process of the synagogue’s structure.

The “Soldier’s Synagogue” as it is locally known, is not only of tremendous historical value for the city, as well as the local Jewish community, but is special as it’s one of only five left in existence in the Russian Federation, constructed entirely out of wood. After being damaged by fire in 1906, the building was enlarged and increased in height, which included the addition of three domes. The improvements also included the addition of intricate, Judaica-themes wooden carvings on the doorways, jambs and window frames — Torah scrolls, stars of David, and bunches of grapes.

Having suffered the same fate as most other Jewish houses of worship during Soviet times, it was restored to the local Jewish community in 2018 by Tomsk city authorities.

The Directorate of Construction, Restoration and Renovation (DCRR) has stipulated that the winning contestant must be able to formulate and submit all design estimates and relevant technical documentation within 487 days, as well as to complete all necessary surveying work of the site. <<Interfax Siberia>> also reported that according to the same DCRR website that announced the launching of the contest, a sum of ₽9 million was disbursed for the budgetary requirements of hosting the competition. Applications are to be accepted until June 5th.