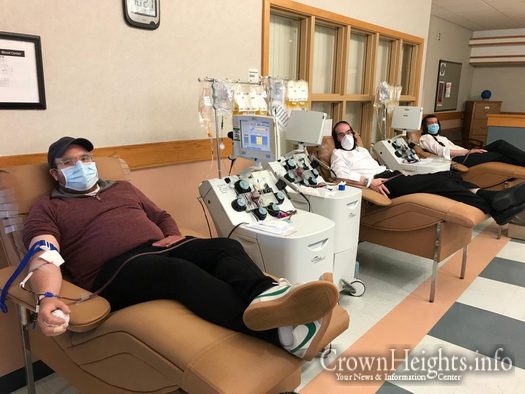 New York’s Orthodox Jews comprise half of all US plasma donors volunteering to donate blood to help coronavirus patients recover, the Daily Mail quoted a medical expert as saying.

The Mayo Clinic’s Dr. Michael Joyner told the New York Times that over 5,000 recovered coronavirus patients around the US have donated plasma to help other patients, but “by far the largest group is our Orthodox friends in New York City.”

He added, “I would be shocked if they were less than half the total.”

According to the Times, since April 4 over 12,000 of New York’s Orthodox Jews have signed up to one of several community programs to donate plasma, and organizers expect the number to reach 30,000 in the near future.

Dr. Shmuel Shoham, who is leading a study on plasma as a preventive treatment for those exposed to COVID-19 at John Hopkins University, told the Times that the Orthodox community are “punching way above their weight” when it comes to donating plasma. “The community has taken a tragedy and turned it into a superpower.”

Avrohom Weinstock, who organized a drive through Agudath Israel, told the Times that rabbis have allowed their communities to drive to blood banks on Shabbat (the Sabbath, when Jewish law forbids driving), if that is the only available appointment time, so that as many lives as possible can be saved.

Traditionally, Judaism has placed supreme importance on the value of lives and saving lives, allowing almost any commandment to be transgressed if the transgression will save a life.

From a moral and religious perspective, we have every obligation to do whatever we can,” Weinstock explained. “If we find out later it saved 50 lives or 100 lives or 20 lives, whatever the case is, if it’s 20 lives, it’s worth every effort, every minute of it.”

“I think that it comes from our education and the way we’re raised, the idea of kindness, or chesed, as being one of the foundations of what the world is built on and how it is sustained.”

The Times also noted that New York’s blood banks can no longer keep up with the demand, so many wanting to donate blood travel to Delaware and Philadelphia to donate.

Mordy Serle, an Orthodox Jewish lawyer, was one of them, traveling from Brooklyn to Pennsylvania last month to donate blood. He has also helped organized donations.

“There were probably never so many Hasidim in Bethlehem, Pennsylvania, in the history of the world, and here they’re riding in literally to save lives,” Serle told the Times. “We look at it as a gift that we recovered, because many people in our community did not recover. And for us a gift is not something to sit back and enjoy and just talk about, it is a gift we have to use.”