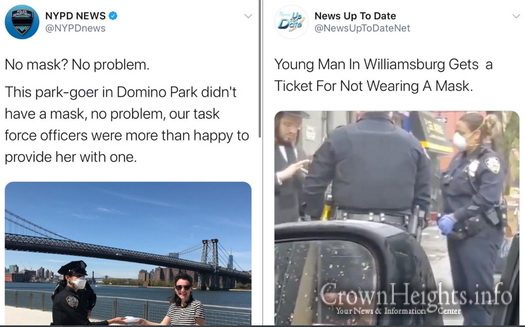 This Saturday was a first for the season. It was beautiful outdoors with the sun out and warm temperatures.

As the warmth came to the parks and promenades of New York City, so did the city’s residents. Thousands of New Yorkers thronged the streets of the city, visiting its parks and hanging out on street corners. Few of these people wore masks, with many completely disregarding any social distancing guidelines.

“16,000 New Yorkers dead in 8 weeks!,” tweeted Cleavon Gilman, an Emergency Room physician in NYC. “This is a SLAP in the face to healthcare providers nationwide risking their lives and dying on the frontlines of the coronavirus pandemic.”

Unlike the Mayors and NYPD’s response in the Jewish communities this past week, the large crowds were ignored by the city government and law enforcement agencies.

As the videos and pictures flooded social media, the condemnation of the Mayors double standard against Chassidic Jews flowed in.

Amid people questioning why there was no police intervention on Saturday, one person responded that “They’re not Hasidic, why would @NYCMayor care?”

When a large crows of Chassidic Jews in Williamsburg attended a funeral of a well known rabbi, the mayor showed up, ordering the crowd dispersed before tweeting out condemnation of the event. The NYPD then began a crackdown in Williamsburg and Boro Park, targeting solely the Jewish communities.

Thursday and Friday of this past week found the NYPD stationed on the streets of Williamsburg and Boro Park, handing out $1000 fines to those who dared walk outdoors without a mask

“My message to the Jewish community, and all communities, is this simple:” DeBlasio had tweeted on Tuesday. “The time for warnings has passed. I have instructed the NYPD to proceed immediately to summons or even arrest those who gather in large groups.”

Apparently, the Mayor had only meant the Jewish communities in that tweet.