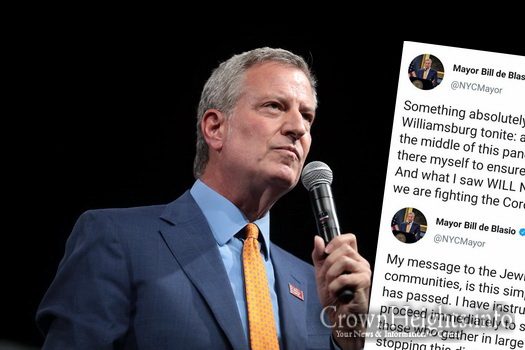 DeBlasio had again tripped himself up on twitter after calling out Orthodox Jews for not following social distancing guidelines during the funeral of a greatly respected Rabbi in Williamsburg.

“My message to the Jewish community, and all communities, is this simple:” tweeted DeBlasio. “The time for warnings has passed. I have instructed the NYPD to proceed immediately to summons or even arrest those who gather in large groups.

The funeral itself had been previously arranged with the NYPD, with a police presence on hand during the funeral. The streets around the funeral had been closed, and each participant asked to wear masks and practice social distancing.

Yet for some reason, Deblasio found the need to call out the funeral specifically. “Something absolutely unacceptable happened in Williamsburg tonite: a large funeral gathering in the middle of this pandemic. When I heard, I went there myself to ensure the crowd was dispersed.”

The tweets sparked a deluge of outrage from the Jewish and non Jewish community alike.

Senator Ted Cruz wrote, “Would DeBlasio have sent this identical tweet with the word “Jewish” replaced by any other religious minority?”

The condemnation went personal as people began questioning the Mayors own actions during the slowdown.

“What??? This has to be a joke.” Councilman Chaim Deutch swrote. “Did the Mayor of NYC really just single out one specific ethnic community (a community that has been the target of increasing hate crimes in HIS city) as being noncompliant?? Has he been to a park lately? (What am I saying – of course he has!)”

Badchen Yoely Lebovitz made the point slightly more humorously. “Something absolutely unacceptable happened in Central Park today: a large gathering in the middle of this pandemic. When I heard, I went there myself and saw no Hasidic Jews.. so I ignored it and went on with my day…”

The double standard starkly shows how quickly the mayor will turn on Hasidic Jews to make a point, while ignoring the blatant actions of everyone else.

“I go running every day in Prospect Park,” a Crown Heights resident told CrownHeights.info. “It’s packed and almost no one is wearing masks.”

The tweets timing could not have been worse for the message, with social media flooded with videos and photos of New Yorkers packing the streets and parks to watch the Healthcare workers Flyover Salute that took place on Tuesday.

The Mayors response to all other blatant incidents of blatant disregard for social distancing? Nothing.